The Outer Worlds is very Fallout-y, but also its own thing 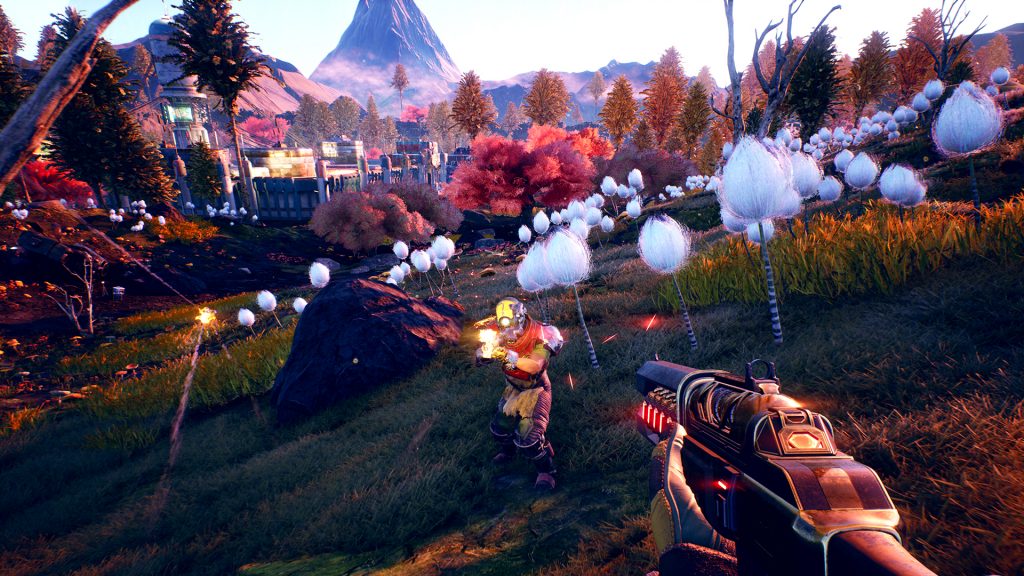 A world filled with misfits, underhanded enterprising types, philanthropists, misanthropic scumbags: The Outer Worlds is a game in which you can be whoever, and whatever, you want to be. Even a psychopath, if you feel so inclined. Player agency is king in Obsidian's ambitious single-player RPG, and while it inescapably takes a few leaves out of Fallout's book, this is something that is very much its own thing, as I found out when I had a few hours to play it at a recent preview event.

Dropped on colourful planet Monarch, right by a signpost – symbolic, given that we can go wherever we want – it's a short hop to the settlement of Fallbrook, a small backwater town lorded over by the SubLight Salvage & Shipping company. At the local watering hole you can knock back a drink, gamble, or engage in a spot of mercenary work to earn some 'Bits' – the official currency of The Outer Worlds' star system of Halcyon.

Everything you do in The Outer Worlds affects your standing in Halcyon and your alignment with certain factions. Evidently, Obsidian's experience on games like Fallout: New Vegas and Alpha Protocol have really reaped dividends for its next foray into complex RPG territory, every action having direct, immediate consequences. Kill someone, and guess what? The faction they're aligned with won't like that very much. And they won't like you either, unsurprisingly.

Resisting the temptation to go on an all-out rampage isn't easy, however, as the game quickly furnishes you with an arsenal of diverse and exotic weaponry. From the lowly standard-issue handguns used by the Spacers to meaty heavy weapons like rapid-fire cannons, scoped rifles, and the deadly plasma launcher that catapults glowing balls of explosive, flesh-searing death, there's a gun-shaped tool for every job. Or a spiky, razor-edged melee weapon with which to bludgeon. 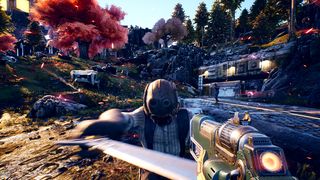 Between the bustling townships, Monarch's bright alien flora is habitat to a variety of weird and wonderful creatures, like raptidons, mantisaurs, and benign canids that will quickly turn on you if you mess with them. Little sprats, meanwhile, are among the planet's reptile-like vermin, scurrying around the place, and in one quest I did, a means of discreetly ferrying illicit drugs. There's a dodgy deal to be brokered here, if you're devious, or you can take a conventional, more honest approach to score points with SubLight.

With the shady Nelson Mayson’s sprats going missing, the flow of narcotics through Fallbrook has been disrupted, meaning it falls to you (if you're game) to find the green little wretches and determine what has happened to them. Upon discovering that an animal lover has been giving Nelson's sprats a safe haven, you can spare the creatures and leave them in peace with their protector, picking through their crap to extract the errant drugs and return them to Nelson.

How the quest concludes is down to you: you could lie about the whereabouts of the sprats and the gear to screw over Nelson and his operation by pocketing the valuables, or be straight with the bowler hat-sporting dandy to get in good with the local faction. You can squeeze Nelson for more cash by intimidating him or use your charm to keep him sweet. This one, rather brief, quest is the perfect microcosm for the type of freedom The Outer Worlds affords. 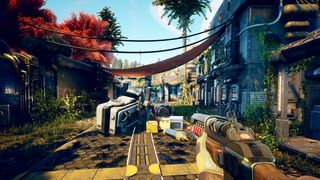 Another mission for the Fallbrook inn's owner, Catherine Malin, had me infiltrating a cystipig meat processing plant in one of a variety of ways. You can don a disguise, procure a black market keycard and go in quietly, or you can sneak around the back into a sewer pipe that jettisons payloads of disgusting piggy waste into the river. And if an attempt at stealth does devolve into combat (as mine did) then the Tactical Time Dilation mechanic can prove very useful.

While drawing obvious comparisons with Fallout's VATS, TTD is actually slightly less sophisticated, simply slowing time to give you space to aim properly and isolate designated weak spots. Yes, it does sound like VATS, and if you choose to pour skill points into upgrading its efficacy, you can make it even more like VATS. Pleasingly, The Outer Worlds also plays rather well as a straight-up FPS without the aid of TTD, so much so that I'd often forget that it was even a thing.

Whether shooting marauders or roving beasts in the wilderness, the gunplay feels remarkably robust, even if it isn't exactly going to give Call of Duty a run for its money. But it's the systems that will prove to be The Outer Worlds main draw – the skill trees, dialogue choices, companion characters, bizarre optional 'Flaws' that you can develop in exchange for a skill point (I formed acrophobia because I kept falling off ladders), the vein of dark humour that runs throughout, and the other complexities that all make for a compelling, intricate RPG prospect.

The Outer Worlds is set to launch on PC, Xbox One, and PlayStation 4 on October 25.