The Crew 2 preview: you can dive bomb New York in a Porsche

In The Crew 2, sequel to 2014’s open world racer The Crew, you can switch between flying a plane, driving a car, or piloting a boat whenever you want to. This doesn’t mean stopping, getting out of your car, and getting into a boat. This means you press a button and whatever you’re in changes to whatever you choose from a radial quick select of land, sea, or sky. You can be flying above the financial district of New York and dive bomb the tarmac in a Porsche. Or turn your Porsche into a boat and sit lamely in the middle of the street, laughing at yourself. There is no explanation for this. You can just do it. Because why not?

Currently, the only let down to this is that the vehicle re-frames, rather than doing an amazing unfolding act like a transformer. But Ubi is still working on The Crew 2, so there’s time. The four hub areas in the world aren’t done, for example, and you can see some jagged edges here and there on some textures — maybe as a shadow falls across the bonnet of your super car. But, for the most part, The Crew 2 is looking good, and is a visual improvement upon the original (especially in the environments). It’s a bit unfinished right now, sure, but we can’t really hold that against pre-alpha gameplay.

Though the trailer, like trailers for many racing games, is pretty standard, emphasising how cool all those shit-hot drag racing cars and speed boats are, in practice The Crew 2 doesn’t seem to be taking itself very seriously. So yeah, there are gleaming super cars, but rather than belching a Clarkson-esque ‘The acceleration is like making love to a horse with a V12 up its arse,’ the game whispers ‘Okay, try doing a 180 handbrake turn in the middle of a four lane road. Or don’t, or whatever. Wanna do a speedboat race instead?’

Though you can’t drive locomotives, and I have therefore been uncharitably prevented from using the strapline ‘Planes, trains and automobiles’ (which I would have done for every single piece I wrote on this game), the developer who took me through the preview explained that the team put effort into making sure the vehicles handle differently, but are still accessible. The intention is that while a plane doesn’t feel anything like a car, you should be able to pick up flying as easily as driving, which you can — though ‘easy to pick up’ comes with ‘hard to master’, like playing bass guitar, or owning a cat. There’s some careful detailing buried in there as well. When you’re racing on water, you can be buffeted by the wake of other boats if you cross behind them, and you’ll occasionally see animals wandering around (though I was reliably informed that you can’t lose the lead by crashing into an unexpected boar, just as you can’t crash into pedestrians either).

You can hit trees, however, which is a feature displayed prominently in the offroad racing. Here you have a checkpoint in the distance and can reach it via whatever route you like. Theoretically this means catching mad air over grassy hillocks like a total badass. In the area I played it was sometimes more efficient to stay on the road, rather than failing to thread the needle between two thin saplings that stand against a speeding buggy like iron girders. All the bits of the open world America I saw (New York City, the scrubby woodland hills, and a sunny swamp) had a mix of destructible elements, and some elements that weren’t as destructible as you might expect.

Offroad is only one type of motorsport in the game, though. Each of the previously mentioned hubs represent a different school, so as well as offroad there’s street racing, pro racing, and freestyle. You can focus on different disciplines as much as you like, as they all contribute to your overall score. The Crew 2 is very keen to make sure you’re not boxed in at any point, though some structure might be welcome for players who, faced with the entirety of North America, may not know where to start.

The Crew 2 certainly has breadth, but its depths have yet to be plumbed. As you would expect, there’s vehicle customisation and multiplayer, the usual trappings for a modern motorsport game, but how much complexity The Crew 2 will have, how far you can drill down into your leaderboards and time trials, remains mostly unexplored. But whether or not it appeals to everyone, it’s always nice to see a racing game lean into being fun.

That folding-over-like-in-Inception thing from the trailer does actually happen in the game, by the way. 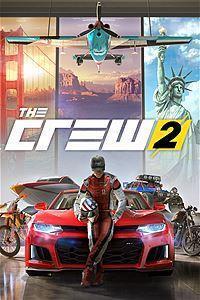