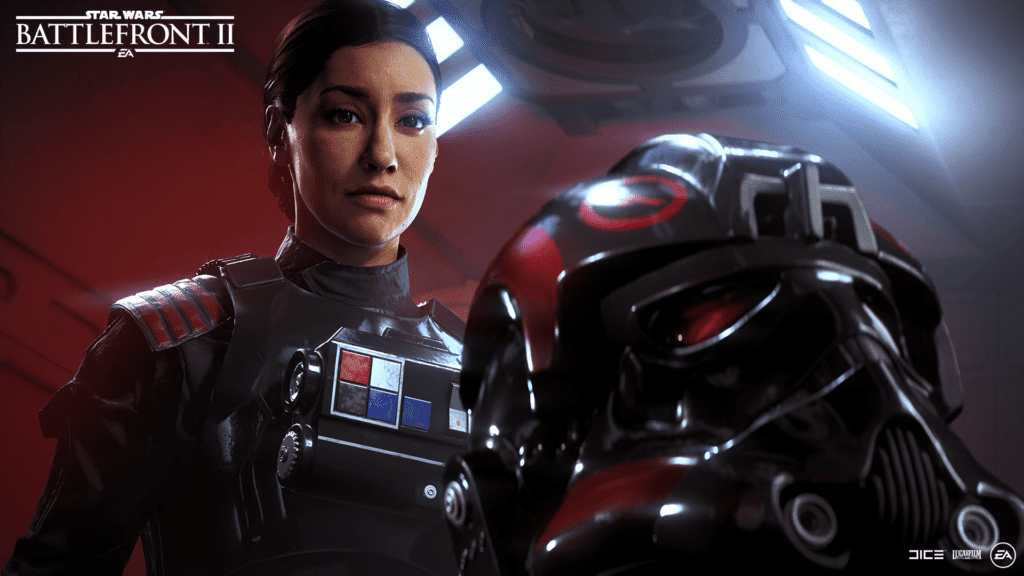 When the Star Wars Battlefront reboot came out in 2015, people were clamouring for there to just be more of it. There wasn’t a single player and it shipped with relatively few maps, large though they were. There wasn’t even ground-to-air combat or anything, and they even had that in the old ones. And lo, EA announced that in Star Wars Battlefront II (2017) there is a single player.

EA is having a few issues around Star Wars just now. The publisher just shitcanned the studio working on what I suspect would have been a genuinely interesting, if more linear, Star Wars game in order to change said game ‘to deliver an experience that players will want to come back to and enjoy for a long time to come’, which most people have read as meaning ‘to make a game-as-a-service game we can keep making money from after its release.’ Battlefront II’s recent beta resulted in criticism from players for the way loot boxes are integrated, at a time when loot boxes are already a sore subject. You even use and earn Star Cards in the single player, albeit in not as critical a fashion as multiplayer. So Battlefront II has a lot to prove.

I’m not exactly sure what I expected from the single player, but what I played wasn’t it. The single player was conceived, we were told, with the aim being to stick to the core of the game (the balance between being a trooper, being a pilot, and occasionally being a hero), but offering variety and ‘an unfamiliar perspective’ at the same time: What is it like to be a Stormtrooper looking up at the Death Star exploding?

To which the answer, classically, would have been: who gives a shit?

The morals of Star Wars were uncomplicated to start with. The Rebels are the good guys. The Empire are the bad guys. That’s it. Jedi vs. Sith. Good vs. Evil. Love vs. Hate. There was some swing between the two, of course, which is where the human interest story is, but generally speaking the fact that the Empire explodes planets when it feels like making a point has served as an indicator that we shouldn’t be rooting for ’em. There’s also the detail that the Empire was partially modelled after the literal Nazis, as evidenced by the fact that Stormtroopers are called Stormtroopers, for chrissakes. The Empire being a bunch of unrepentantly evil people doing evil stuff is so ingrained in us that the idea that its staff could just be regular people at a regular job is something that’s been consistently used as a joke over the years, and still is. If they’re not all evil, then blowing up the Death Star or the Starkiller base is pretty sinister itself, so it surely behooves Star Wars to stay uncomplicated. But, if we return to the fact that the Empire was crafted to be a bit like the Nazis, then we can look at this discussion of their representation in games, and the idea that simple, uncritical representations of ‘evil’ aren’t doing us any favours any more. But how nuanced can we expect the campaign from a game that’s predominantly a multiplayer shooter to be?

It’s hard to say, because we only saw a few levels from the very start of the game, but apparently the full campaign is wide ranging, at least in terms of lore: there’s at least one mission involving a character from the new movies, and there’s an entire new planet, home to people all loyal to the Empire.

It’s very fun in terms of how it actually plays. It’s like being inside a Star Wars film. The single player protagonist is Iden Versio, not a clone or a run-of-the-mill trooper, but the leader of the elite Inferno Squad and the daughter of quite an important Imperial commander who, in defiance of workplace conflicts of interest, also gives her orders. Iden starts off with a very movie evil voice: the Empire’s time has come, and all that, and it’s arrived in a kind of hoarse, brows-perpetually-knitted-in-sinister-anger tone. Based on the quite obvious behaviour of her two squadmates (Hash, an obvious company man, and Meeko, a slightly nervous sniper), I’m guessing the one will stab her in the back, and the other will go along with the betrayal but eventually redeem himself by helping Versio escape. Versio is going to realise the Empire is a crock of shit and cross the floor. Or something like that anyway.

Anyway, this is all speculation, because the first bit of the game only covers the events immediately before, during, and after the successful attack on Endor and destruction of the Death Star, and each of the three bits I played were very different. In the prologue I controlled Versio’s droid, stealthily piloting it around a rebel ship to destroy some intelligence and escape. In the first mission, Inferno Squad were sent to try and repair the Death Star shield generator in the leafy forests of Endor and, finding it completely borked, had to escape. Then followed a pitched space battle in a TIE fighter, wheeling around the floating debris from the Death Star’s explosion.

Iden’s flying droid is incredibly cute, and after the prologue level it floats around after you, so you can send it to shock one group of enemies as you shoot some of the others, which is very satisfying. Like the multiplayer, the combat felt sometimes tactical and sometimes frantic, like you’d lost control of the battle a bit. It was enjoyable, even if it wasn’t breaking any Battlefront molds.

But possibly my favourite bit of the whole thing was when we swooped in to save a group of troopers that were being surrounded by rebel forces, and one of them yelled, ‘INFERNO SQUAD?!’ over the the comms in a way that would not be out of place on a Saturday morning cartoon. There was something quite cool about being the hero of the villains. When I shot down rebel X-Wings I kept thinking ‘That man had a family!’ because you and I know the rebels are the nice ones, and he probably did have a family, right?