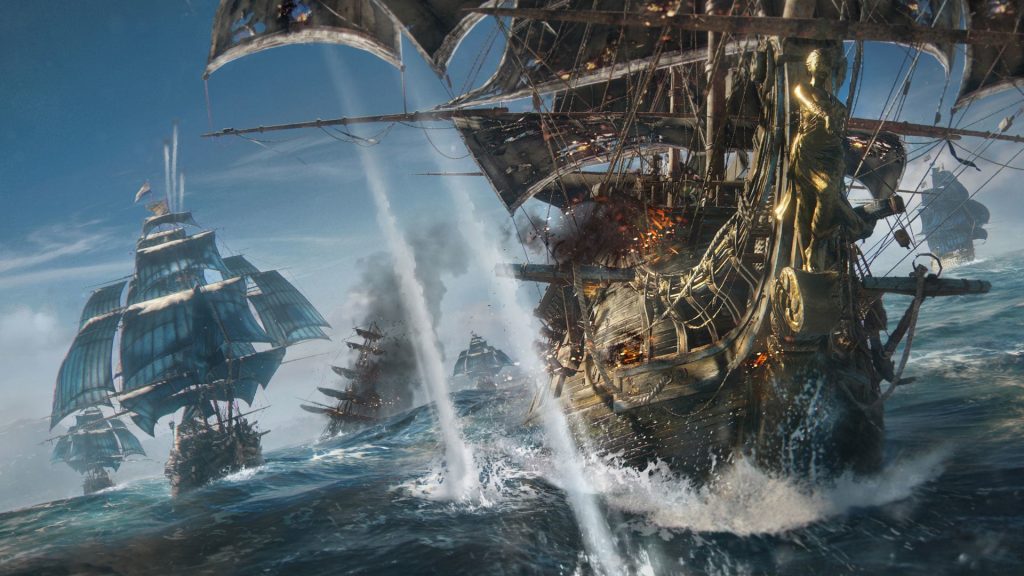 Skull & Bones and the story of the lonely pirate

It’s the other pirating game – the one that doesn’t allow you to leave the ship and comes off the back of Assassin’s Creed IV: Black Flag rather than the product of those working at Rare to design something good and interesting. Yes friends, it’s Skull & Bones.

I played Ubisoft Shanghai’s upcoming multiplayer ship-shooter against (the option to ‘with’ is there, too) nine others at E3, and it’s pretty good fun. It’s all about creating your pirating fantasy – create and edit your captain (yes female captains are a thing and yes there’s historical precedent for that so shove it up your impotent Twitter protests), choose your ship and – at least in the finished game – upgrade and edit your seafaring war bastard to make it reflect your personality. Dour, in my case.

In what I played Skull & Bones offered more limited options, understandably, with a selection of three different ships to jump into the action. One fast and weak, one in the middle, one slow and tough, and each with different special powers to activate, like an infinite-firing broadside ability (overpowered) or the ability to engage RAMMING SPEED – always hilarious.

So you’ve got your archetype and you’re on the water – what now? Well, this was an open waters area off the coast of Madagascar, with 16 kilometres squared to roam about in. In roaming you can attack passing merchants, engage with warships from specific nations like Britain and Portugal,  and even tussle with bounty hunters if you steal too many delicious chocolate bars wow that’s a shit joke. [Editor's note: VideoGamer does not condone the eating of Bountys as they are absolutely manky.] 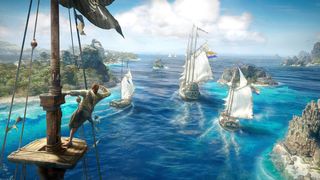 All of this is PvE – probably a good thing when it comes to this demo, as much as I asked, nobody wanted to team up and rampage through the seas together. So I, the most lonely pirate in the world, discovered the joys of avoiding ongoing war-fights while hunting for treasure dotted around the map and battling the sheer might of the original invisible dickhead: strong wind.

Wind is a big thing in Skull & Bones, and you need to pay attention to it and harness it to the best of your ability if you’re to make it around in a non-annoying way. Behind you, angled, even side-on it’s workable. Let it get dead-on against your bearing, though, and you’re buggered – ‘in irons’, as us piratical types say – unable to move with any real pace, almost locked in for a time. Not ideal in the midst of combat.

See, while I was pootling around minding my own business, trying to figure out this wind stuff – and get to grips with the close-in third-person perspective that initially feels so busy on the eyes – I kept on getting attacked. No complaints – it’s a big part of the game – but when you’re still adjusting to windy issues, it’s a mite overwhelming. 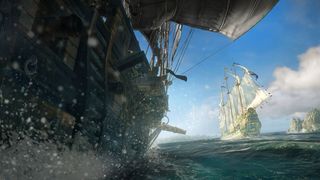 Combat soon became pretty straightforward, though, which is testament to the relative straightforwardness of Skull & Bones. When it comes to blasting others with your wall of balls, it’s a simple case of navigating to be side-on, holding the left trigger to aim, and pulling the right trigger to fire.

Obviously there’s more than that – you have access to mortars and rockets as special weapons, as well as chainshots to destroy the sails of your opponents, rendering their wind mastery moot. In a matchup with the AI, things were difficult and exhilarating. In a matchup with a journalist as inexperienced as myself, I simply unleashed the hell of unlimited broadsiding and took him out with ease. I’m assuming there’s a way out of that he didn’t know about, otherwise it’s massively overpowered.

It’s not all ship-to-ship, mind you – there’s combat against fixed emplacements like the fort in the level we played. I was informed I should tackle this with others, as it was hard, but still none of them would team up with me. I’m totally blaming Brexit for that by the way; the room was littered with European journalists. So instead I went at it alone.

Three sinkings later, it dawned on me the Ubi rep wasn’t wrong in his advice, and that our future in Britain without the help of our European allies is bleak at best. But that’s for another time. Skull & Bones isn’t an easy romp on the high seas, then, instead offering players a real challenge and demanding they team up – even if there is support for those going solo. 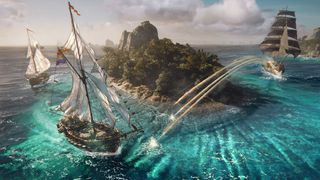 What else? Well, it looks lovely, and the sea, particularly, is absolutely stunning – and a tad stomach churning. The system of using both a crows nest and spyglass to survey the area takes some getting used to, but ultimately works well, as well as being a cute little touch. And stealing flags from sunken wrecks and pretending to be Portuguese, sailing around extolling the virtues of… I don’t know… salted cod? is always the kind of thing to make me chuckle.

I hardly saw anything of Skull & Bones last year, and I’m pretty sure I referred to it as Sea of Thieves more than a few times when chatting about it with colleagues. It hadn’t made any discernible impact beyond a vain hope there would be plenty of sea shanties in the game. Beyond that? Not much interest, to be honest.

Playing it has changed that – but only a bit, I have to admit. Skull & Bones has gone from a vaguely understood idea about pirates and multiplayer to something I a) have played and enjoyed, so am looking forward to playing more of, and b) can remember the name of.