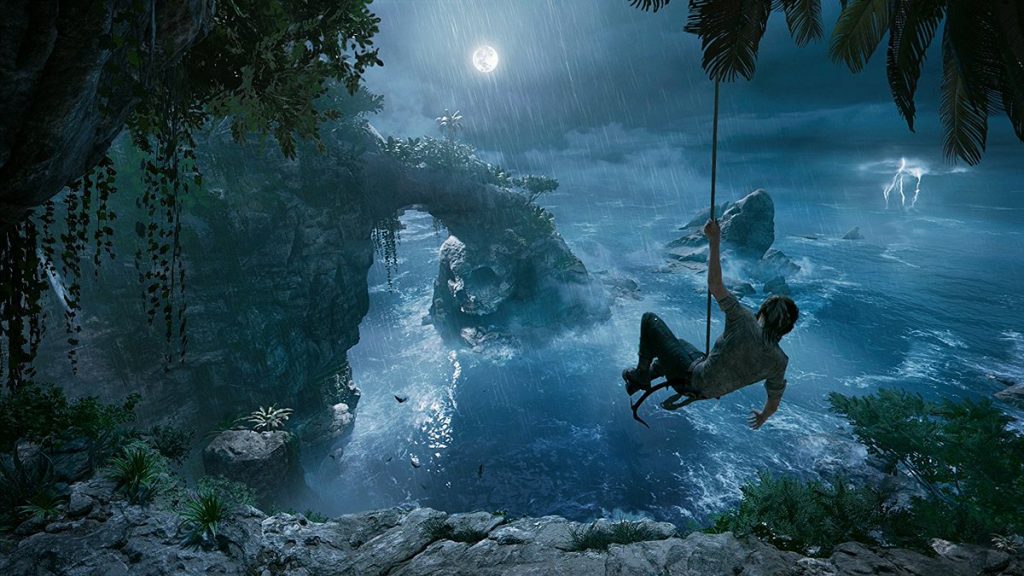 I was fortunate enough to play 45 minutes of Shadow of the Tomb Raider, but I played it yesterday at a time roughly analogous with what I would describe as my bedtime*. Fortunately, Lara and Co., Ancient Building Demolition Specialists for Hire (reasonable rates) played into this quick-turnaround embargo by delivering what appears to be very much another Tomb Raider game (duh). You're not going to see the same breadth of design change between Rise of the Tomb Raider and this as you have between God of War 3 and God of War 2018: ThunderDads Are On the Move (ThunderDads Are Loose), is what I mean.

If you liked Tomb Raider, and her subsequent Rise, then get ready for another game you're going to enjoy, which is absolutely fine and is the same way I choose new punk bands to listen to. There is another three years of getting good at making games on top, though. It does look arrestingly lovely at times; the section I played (from a little way into the game) started in a Peruvian village, at night, during Día de los Muertos, confronting the player with such an excess of beautiful candlelight and flower petals that it feels like the game is also about to open a bottle of red and reveal a three course dinner.

But still, it's more Tomb Raider. So in the interest of efficiency the rest of this preview is presented as a handy FAQ, though you should know that there's an additional narrative layer on top this time, in the form of, finally, Lara starting to wrestle with the realisation that actually maybe plundering the significant historical sites of other cultures like you own them may have consequences. There's a great bit where Jonah yells at her to STFU and stop making it all about her, because a tidal wave just destroyed a village and they should probably help. 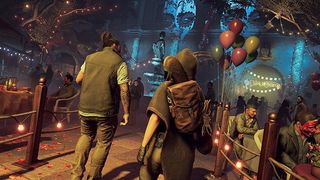 Where is it set?

The bit I played was in Peru, exploring ruins from the Maya civilisation. I don't know for sure but I would guess that at least the majority of the game will take place in South America.

Who is the bad guy?

Dr. Dominguez, the leader of Trinity (the same militaristic evil organisation that Lara fights in the previous two games in this reboot cycle).

What is the MacGuffin?

What is the peril?

Apparently just taking the key when you don't have the box starts off the apocalypse. The key and the box can be used together to 'remake the world'.

I was just thinking that.

Does Lara still have that climbing axe?

Does Lara still have a bow?

Does Lara still have amazing hair?

Does Lara still have her mate Jonah? 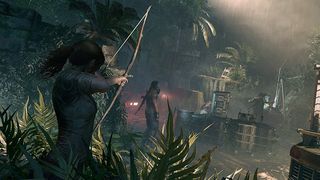 Does Lara still use both the axe and bow to stealth-kill living, breathing men – men with families, men who maybe just fell in with the wrong crowd because the recession hit the poorest hardest and there are only so many ways to make money, men whose mothers will now sit up at night never receiving full closure – without apparent compunction or pause for thought?

Yes, and it's pretty cool.

Do you still get to use guns though?

If you shoot red barrels do they explode?

Do you still use the bow to do that thing where you fire a rope at debris blocking a doorway and then use the rope to pull it down?

Can you also still do the same thing but to make a rope you can shimmy across big gaps with?

So you still do climbing and platforming?

Do ledges and platforms crumble unexpectedly beneath your feet sometimes?

Do you still do that thing where you jump and have to hit a button to stick the climbing axe into the wall? 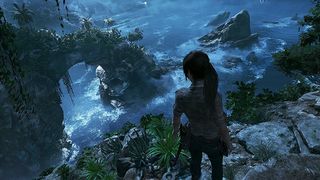 And sometimes maybe it doesn't go in right on the first try and you have to press the button again really quickly or she'll die?

Do you still get to rappel down from cliffs with the rope like an absolute hero?

Can you craft stuff?

Yes, but I'm not sure what exactly because trying to bring up the map or inventory got a 'Work in Progress!' placeholder, which is fair enough.

What kind of ingredients are there?

Ingredients for craftables I found included mechanical parts, mushrooms, and these really cool giant beetles that, actually, I would have preferred to let live, or possibly keep as pets. They seemed really friendly.

Are there secrets to encourage exploring, like extra treasure or hidden artefacts?

Yes, although I don't know how open areas will be; the preview section was fairly, if not totally, linear.

Do you learn more about the indigenous people by finding said artefacts?

Yes. The bit I played had a challenge to shoot five hanging carved decorations, for example.

Is there a bit where you're going through a tunnel with only one light and it's all atmospheric and mad cool?

And then it suddenly opens up into a huge cavern full of ruins and you're like 'Woah!'?

Is there a really claustrophobic bit where Lara is squeezing through an impossibly small space and you don't think she'll get out in time?

Yes, and it happens underwater.

Is there still a bit where Lara is rushing along in a flood of water and if you don't move her out of the way fast enough she gets impaled through the stomach on debris, as if Tomb Raider has actually just been pivoting into the snuff market under all of our noses?

*Ethical declaration: Square Enix don't decide my bedtime and I did not promise a specific bedtime in exchange for preview access, but I did eat one (1) small taco provided by Square Enix and then after I ate it I realised it was fish and not vegetable like I thought so ethically I am a terrible vegetarian.