When you think Saints Row, maybe your mind drifts to gangsters draped in tracksuits and purple fleur-de-lys logos, battering rivals with pink dildos before leaping skyward to fly off to the next unhinged encounter. With Saints Row IV and Saints Row: Gat Out of Hell, developer Volition had gone about as far as it wanted to with the series in its well-established, over-the-top atmosphere, which is perhaps unsurprising, given that the last mainline game had you fighting alien invaders as the President of the United States. You can hardly blame the studio for wanting a tabula rasa for this rebooted version of Saints Row, then, but you can rest assured that it’s not throwing everything out—the same brand of humour and the scope for causing complete chaos is still present and correct.

Right out of the gate, Volition is keen to nail home that point, stating that it’s taking a purely “fun first” approach in making Saints Row, with the usual dose of absurdity to go with its open-world action. Despite fun being the primary remit, Lead Writer Jeremy Bernstein is quick to state that the central narrative will remain relatively grounded, with emotional beats sandwiched between the madcap violence. “You’re doing absurd things, but it [all] feels like it matters,” he says. “It has the feel of a Saints Row game, [but] it’s not all goofy.” Narrative Designer Jennifer Campbell, meanwhile, puts the overall tone in a “sweet spot between Saints Row 2 and Saints Row: The Third,” adding that it’s most definitely “crazier” than Saints Row 2.

This is immediately apparent in the hands-off gameplay I saw, which freewheels from comparatively petty crime, such as robbing a payday loans company, to outrunning the police across the desert on a springy dirt bike. Things only become more extreme from there, as you can sideswipe cop cars to send them shooting off the road spectacularly, engines aflame as they explode in mid-air. I also glimpsed one of the emergent ‘opportunities’, too, which, in this specific instance, involved blowing up a stationary armoured truck to steal mountains of cash. Side hustles, like the returning Insurance Fraud, Drug smuggling, Chop Shop missions, and gunrunning Mayhem objectives, which solely revolve around generating masses of destruction to ramp up your score multiplier, also promise a wealth of replayability.

The seamless switch between melee and gunplay means that you’ll be able to blow away enemies, stuff a grenade down their shirt, and kick them in the crotch in quick succession, while in vehicles you can either hang out of the window and shoot or climb onto the roof for a better, albeit more exposed, view. Some rides come fitted with ejector seats, so you can blast yourself out of the sunroof, then deploy your wingsuit to soar through the open world. Speaking of which, Volition has gone to great lengths to make Saints Row’s brand-new city of Santo Ileso the most diverse and interesting urban sprawl to feature in the series to date, aiming to outstrip Stilwater and Steelport with an impressive sense of scale, and plenty of smaller details to discover. Santo Ileso certainly look like it packs in more variety than the series’ other cities. 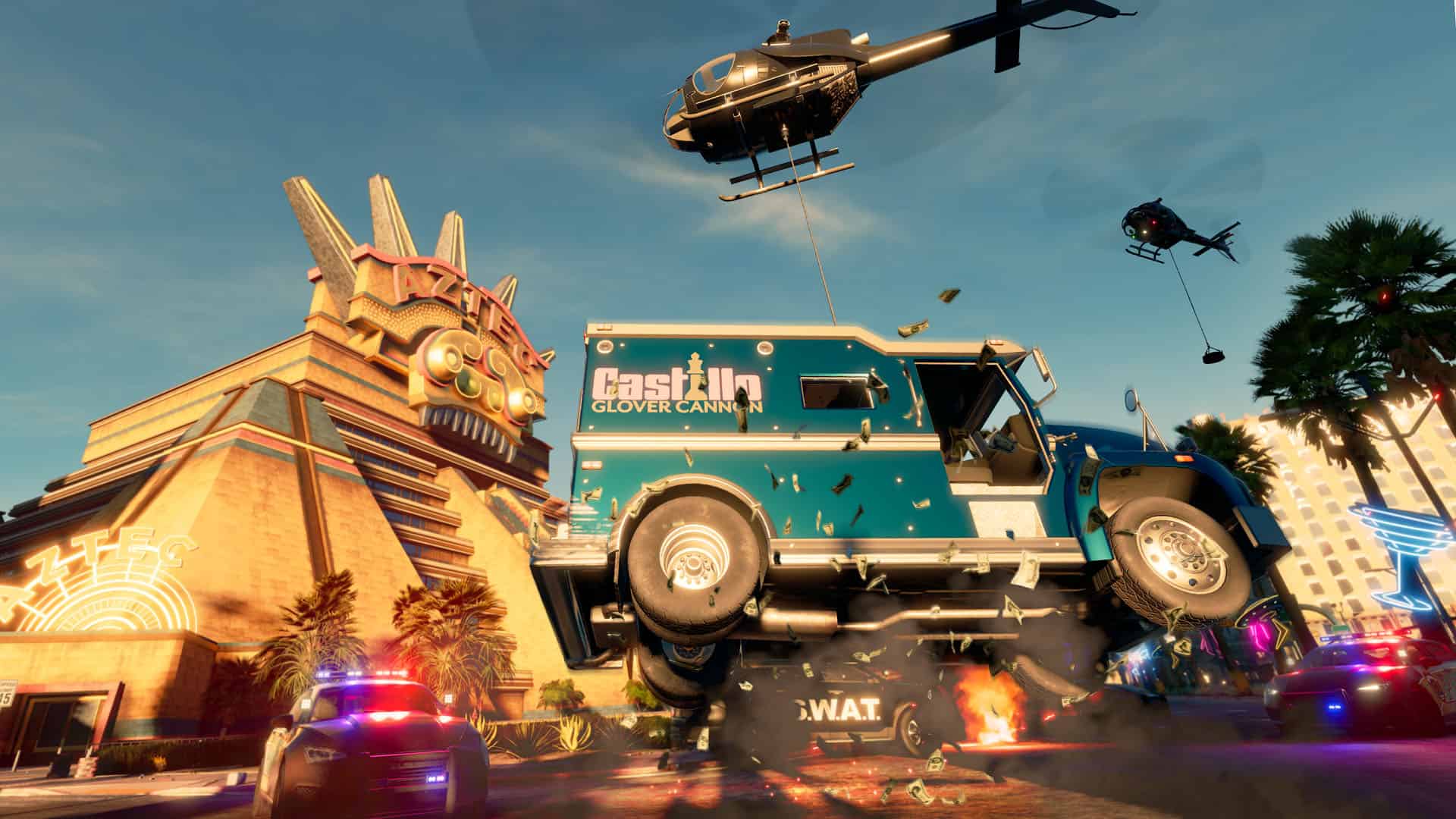 The narrative covers the rise to power of the Saints’, an organised crime syndicate, which, it transpires, began with four housemates from rival gangs, who decided to come together to form their own crew, and consequently attracted the ire of the city’s other factions. As such, you’ll find yourself clashing with the tough and uncompromising Los Panteros gang; the anarchic, fame-hungry fops of the Idols; and the tooled-up private military company with the best weapons, Marshall Defense Industries. The game’s early moments promise to develop connections between your character and fellow Saints Eli, Neenah, and Kevin, in an attempt to make you actually care about them, so when shit does hit the fan there’s hopefully a little bit of emotional heft. Whether it’ll actually work, within the context of all the daftness, remains to be seen.

As you set about building your criminal empire, from the war table of your HQ, in an abandoned church, you’ll be able to customise your character at any time via your in-game phone, tailor your loadout with an array of weaponry, and purchase or unlock a plethora of new clothing and customisation options. You can equip useful perks and abilities, like fire resistance, an electric shock for any enemy foolhardy enough to touch you, or a flaming punch, to give you an edge in a fight, and the customisation extends to vehicles, too, with body kits, wheels, paint jobs, and other gubbins to fully outfit your ride with. 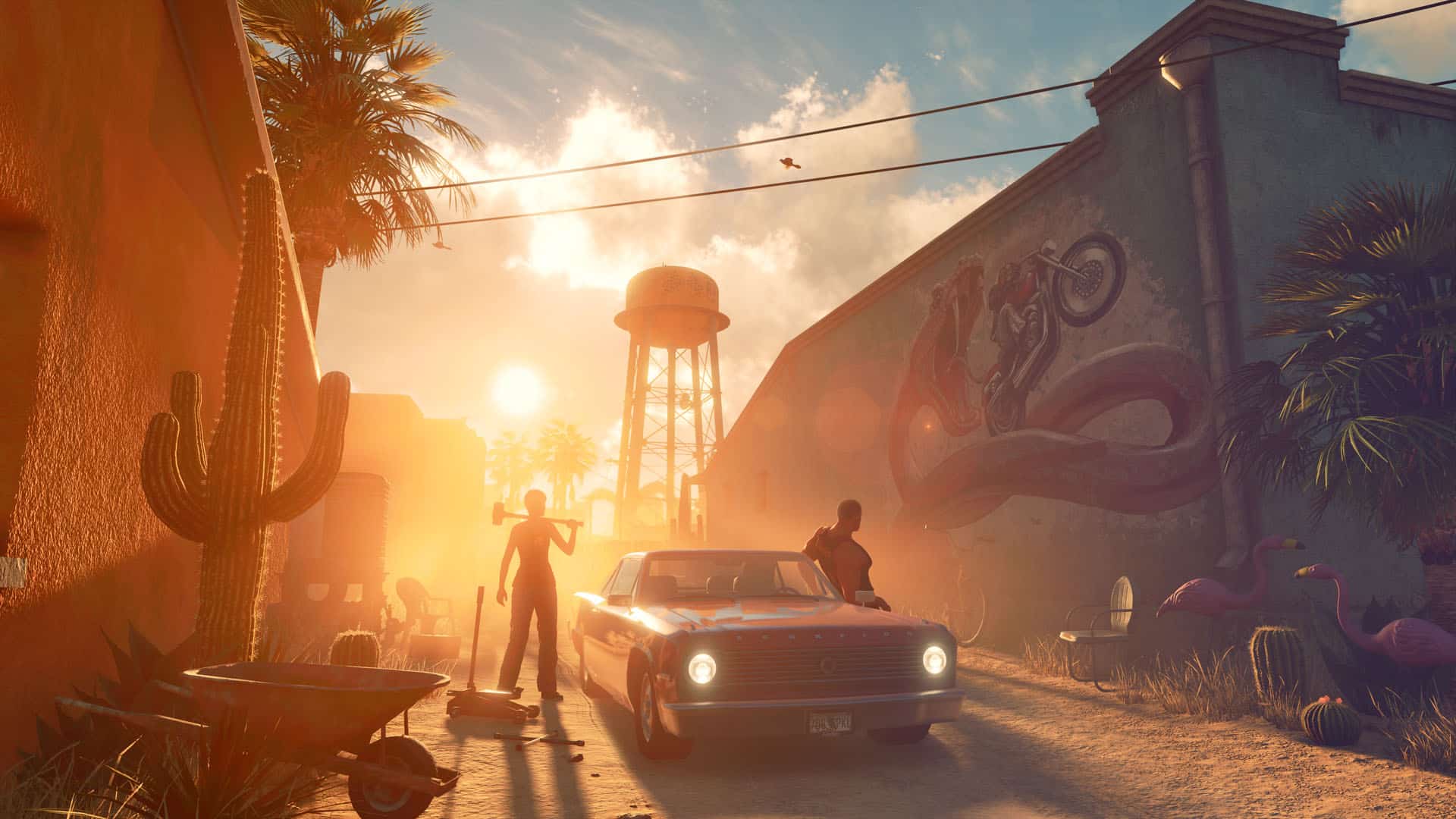 Co-op play, meanwhile, remains a Saints Row lynchpin, with this one offering untethered, drop-in/drop-out support. The example we’re shown featured one player driving along, while a second player turns up flying a helicopter with a magnet attached to a cable dangling from its undercarriage. Of course, you can use the magnet to pick up cars, and throw them around. It’s classic Saints Row fare, as are the foam finger guns, guitar case rocket launcher, piñata launcher, and quantum aperture gun that can shoot through walls. A frenzied bar brawl, an aerial onslaught from the controls of an attack chopper, and numerous other explosive set pieces are wheeled out as evidence that Volition is staying true to the spirit of Saints Row for its reboot, putting to bed any concerns that a clean slate means toning things down. Clearly, this is shaping up to be pure and unadulterated Saints Row, no mistake.