Rage 2 is fun, and id Software thinks ‘video games are supposed to be fun’ 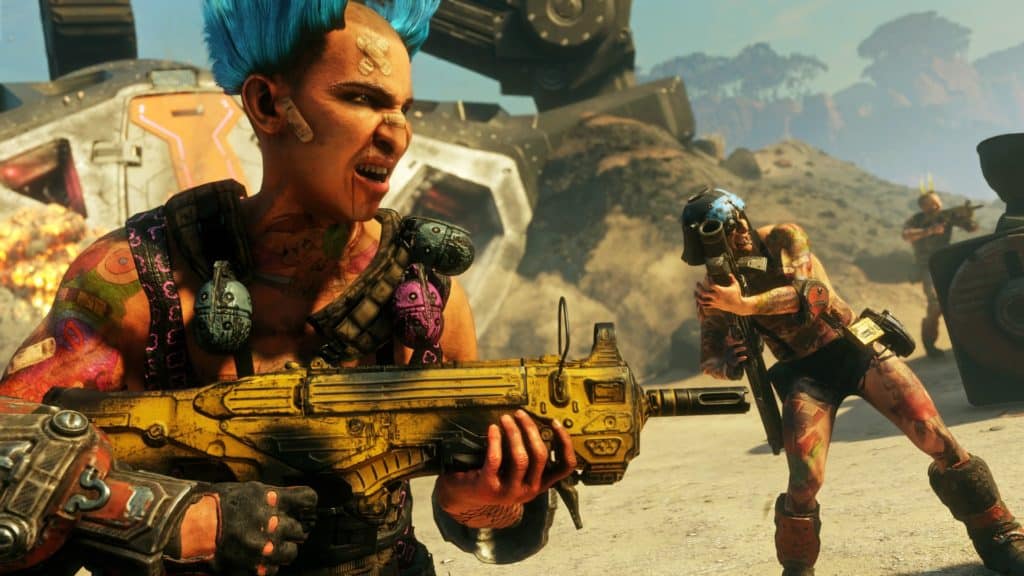 I wonder what it’s like to get a coffee at the id Software headquarters. I imagine you would have to stand in front of an enormous bullseye as hot, black jets of espresso are fired in the general direction of your mouth. Such is the id philosophy, which delights in extreme exaggeration. ‘That’s the id secret of sound effects with guns: put the sound effect in one gun higher… if you have a 9mm, you need to put the sound in of a .50 cal.’ Those are the words of Tim Willits, the studio director at id Software – who I spoke with at a recent event –  explaining why the guns in Rage 2 feel as if they couldn’t have been made by anyone else.

The game’s world, on the other hand, was made by someone else. ‘The id technology is very great, it’s amazing, but it’s not really open world technology. So, when we had an opportunity to work with Avalanche [Studios], and leverage both their experience and the technology, it really kind of allowed us to bring this id-style shooter into a true open world environment.’

Avalanche has whipped up a world with, by the looks of it, one simple design brief: make it colourful. ‘It was very brown wasn’t it?’ says Willits, describing the first Rage, which came out in 2011. ‘And then Avalanche made Mad Max, which was very brown. In our first meeting, I opened the computer and I said, “look, there’s this whole part of the colour wheel which we hadn’t noticed!” I said, “isn’t that amazing look there’s all kinds of colour here!”’ 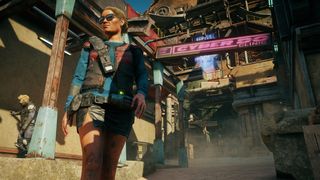 Rage 2 takes place 30 years after the first game, giving Avalanche a chance to blow away the browns and take in some fresh life. Or life, at any rate; its freshness is questionable. The game seems to take its tonal cues from depleted uranium, and the superhot colours suggest a world never far from the brink of frenzy. And it isn’t; as I drove around, the roads were littered with lunatics looking for a fight, giving what Willits describes as the ‘id Software philosophy of gunplay’ a chance to take root.

That philosophy consists of a few basic tenets, as far as Willits is concerned. ‘Movement is offence and defence, big, heavy, meaty, over-the-top weapons, you know, situational-based weapons, and encouraging you to get into the fight. Like in Doom 2016 you get encouraged to do Glory Kills, in Rage 2 you’re encouraged by doing the attacks, you get to Overdrive and you get this loop going.’ The combat feels, as it did in Doom, like a rollercoaster – one in which you’re encouraged to keep your arms and legs outside the ride at all times, in the hopes of lopping off the odd head.

You’ll get many an opportunity to do so. In fact, you may wonder why everyone out in the Wasteland is so eager to kill you, and my advice would be: don’t. ‘The story is the enjoyment that you have when you play it,’ says Willits. ‘You know that you have to take the Authority out, and you know you’re the good guy.’ Quite. Or, you know you’re a guy, at least. (In my demo, the Walker I played was male, but players will be given a choice of male or female.) Imagine the sort of frail and flawed characters video games unearth once in a blue moon – the ones sketched in shades of grey. Now think of the opposite, and you have Walker, whose bland lines of dialogue make you crave Doomguy, who made silence not brooding but charming. 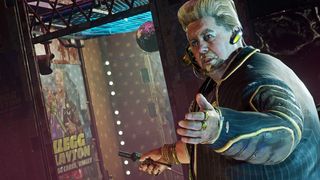 Walker is the last of the Rangers of Vineland, a faction of tech-enhanced heavies that patrolled the Wasteland, and he’s stockpiled a cache of abilities to compensate for the damp dishrag of his personality. These come by way of ‘nanotrites’ – tiny robots injected into the blood, in similar fashion to Prey’s Neuromods, which were plunged into the eyeball – but, really, they come courtesy of Bethesda’s back catalogue.

As you’re caught in firefights, you can nimbly flick between powers. There’s Blink (renamed, of course), from Dishonored, but with an added thump upon arrival. There’s the Recycler Charge (renamed, of course) from Prey, a grenade that sucks enemies into a mini black hole and sprays them out in chewed-up chunks. Then there’s Overdrive, a berserker mode which encourages the sort of aggression you needed to survive the bloodswept halls of Doom’s Hell.

You may think it all a bit derivative – a fair criticism, but one that doesn’t dull the fun to be had in Rage 2. ‘We’re making video games,’ says Willits, ‘and video games are supposed to be fun. Sometimes video game designers try too hard to be artsy. But just make something that’s fun and enjoyable that looks amazing and people will love it.’ 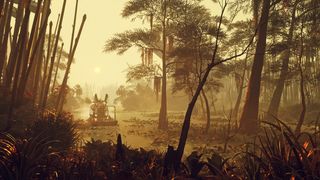 Indeed, it’s exactly the sort of game in which, once its many parts are smashed and soldered together, the sum will do very nicely. The satisfying crunch of id’s shooting, cross-grained with the sandy sprawl of Mad Max’s open world, and livened with a lick of colour. In fact, I could have sworn Avalanche had some paint left over from Just Cause 4; as I drove around, the roads were strewn with lunatics daubed in the halloween hues of glow-in-the-dark makeup – the same greens and pinks that adorned Rico Rodriguez’ resistance fighters.

If the thought of those scattered souls reminds you of the emerald emptiness in Just Cause, fear not; the map in Rage 2 has an emphasis on density. Willits describes Just Cause 4 as having ‘huge swathes of just nothing,’ and stressed, ‘We wanted to be a little more dense.’ ‘You get different biomes: the west has the swamps and the north has the forest, but the density is about every minute or so you see a new something-or-other. It’s about that density everywhere.’

Your exploration is done chiefly behind the wheel, in the sort of vehicles that are primed for slaughter as much as speed. Nails bolted on, roll cages at the ready, and exhausts that spit fire: all are parked snugly in Avalanche’s wheelhouse. Rather annoyingly, driving is ungainly, with a Burnout-style boost that was more useful for whisking me out of roadside ditches than it was for lending me extra speed. The handling produces roughly the same feel as if a pug were plonked atop a skateboard with a firework taped to the back – fitting, perhaps, considering the game’s madcap tone, which resembles a burnt burlesque at the end of the world. 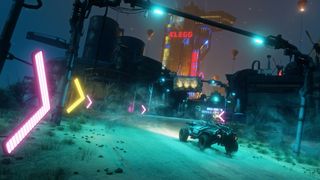 It’s a place where there are people called ‘Watson Whoopinkoff’ and ‘Annie Hilator.’  A world where a reality television show has you slaughtering masked maniacs (a twist which certainly would have provided some pep to the later seasons of Big Brother), and a racing circuit which – amusingly, considering the lack of legislation elsewhere – requires you to fill out paperwork to enter. ‘That’s one of the reasons why we pushed the game even fictionally so far into the future,’ says Willits. ‘So the wasteland would have time to grow.’

Mutate might be a better word for it, and it all jumps with jolts of music that flare as the action ratchets up. ‘So we have a new system where we lay all the different tracks down,’ explains Willits, ‘and then its basically like sound AI, and it generates the music based on what’s happening by pulling different tracks and putting them together. It’s like a dynamic AI system. We do have licenced tracks, but the normal ambient action music is all dynamically constructed.’

‘Dynamically constructed’ doesn’t seem a phrase to be applied to Rage 2, a game where the joins are visible not just between series but between developers. Shards of Bethesda, Avalanche, and id have all been smelted and alloyed to grind out something garish and new. It’s a strange thing, to make a sequel to a game that didn’t set the world alight, and it’s been eight years since the dust of the first game. Time enough for the wasteland to grow.