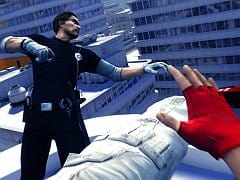 Mirror’s Edge, from the makers of the Battlefield series, is described as a first-person parkour-inspired action adventure game. We were still wrapping our head around that game-describing mouthful when DICE unleashed a brand new trailer, showing for the first time in-game footage in full flow. With the athletic Faith’s exploits fresh in mind, we caught up with DICE’s general manager Sean Decker following his presentation to media at Sony’s recent PlayStation Day in London to dig a little deeper…

VideoGamer.com: I was at EA’s recent Games Label showcase in London a couple of weeks ago and was wondering where the game was. Why have you decided to show it at Sony’s PlayStation Day event, since the game is multiplatform?

Sean Decker: I think it was a good showcase as far as Sony’s a great partner for us. Everything I said up on stage we absolutely believe in. It’s just a great platform to play with and I think it really brings out a lot of things that Mirror’s Edge is all about. It’s an edgy platform, Sony’s is a hit brand. The game isn’t your typical let’s get in the mud shooter that we’ve done in the past and so it felt like a really good fit.

VideoGamer.com: You talked in your presentation about how the PS3 was enabling you to realise your vision for the game. How much does the game actually push the PS3?

SD: The great thing about it is that there’s a lot of little thing like, Faith there when she’s walking like this (points to Mirror’s Edge trailer showing Faith tightrope-walking across a beam), Sixaxis controls, super easy to implement and say OK, well, just balance it and then you’ve got it there as opposed to teaching a player to say oh let’s push this button or that button.

The other thing is the Cell really allows us to push the resolution of our textures much higher and we’ve taken full advantage of that as well. So there’s a lot of little quirks to it that we really like and our engineers love as well as our designers.

VideoGamer.com: So is it a case that you’ll be able to get more out of the PS3 in the future or are we starting to see the limits of its capabilities now?

SD: Oh no. If you look at the last, I’ve been around for two different console cycles now I guess, this is my third one, and it’s always the case that the first several years everybody’s exploring the bounds of it, and it’s not until several years down the road that you’re able to squeeze every drop out of it. Look at games like God of War. On the PS2 it looks brilliant. Try and do that game at the beginning of the PS2, wow, you would have such a hard time doing that. And the same thing’s going to be true for this as well. Over the next several years on all the major platforms you’re going to see all the developers squeezing every little bit out of it. It’s going to be a while before you really push it to the edge.

VideoGamer.com: But exciting times for PS3 owners then?

VideoGamer.com: The game is coming out on 360, PS3 and PC, and you’ve talked about how the PS3 allows you to do different things. Does that mean the PS3 version will be better than the 360 version?

SD: Oh no. Each one is different. Just because again the controls are different, that’s the first start right there. The other thing is again the way that the architecture in each one of the machines is different. It allows you to do different things with them and emphasise things like well let’s try a higher texture resolution on this one and if you want to push the GPU or the CPU and how the engineers want to balance it out, what’s most important in this game and how you want to bring that out in each one of them.

So for us at DICE we have lead engineers on all of our major platforms and they’re the ones who really architect it and say you know what this is what this platform is great for and this is how we’re going to bring it out on it. I wouldn’t say one’s better than the other. Again they have different quirks. It’s kind of like driving several different SUVs and saying one’s better than the other.

VideoGamer.com: Let’s break it down to graphics then. When you talk about the increased texture resolution on the PS3 version does that mean it will be 1080p on the PS3?

SD: No, we’re not going to do high def on either one of them. Really it’s just much more about in certain situations you’re going to see very crisp, clear texture resolutions there and, again, this is more for the techphile, somebody like me who’s sitting up there and looking at every single little detail and saying OK, what’s the difference between this one and this one, putting them side by side.

VideoGamer.com: We love to do that as well!

SD: I’ve seen that so many times now on websites where they’re saying what’s the difference between this one and this one. Our commitment is to make sure that each one of them has super smooth FPS and that the game experience is great and that each player gets what they really want and need out of it.

VideoGamer.com: The game will be in 720 at least on both platforms?

VideoGamer.com: Mirror’s Edge is a FPS game but comes across as something we haven’t really seen before. Was it a challenge to get the game out there or was it an easy sell?

SD: No it wasn’t. I mean it started off as a prototype. We’re known for our Battlefield franchise. And really it was a prototype to see if we could play with the first person movement because we do first person games. And the guys who were playing with it came up with this great movement and they solved a lot of problems. So many problems with trying to do first person movement like this, trying to deal with things like motion sickness, knowing where you are in the world at any given time, you do this great jump and you’re like, OK where am I and all the rest of it, how do you keep this momentum going and those types of things. They were able to basically show that they could solve those problems and come up with something very cool, to the point where we said, wow, let’s make a game out of this.

Really, if you just talk to somebody about it it’s not really that compelling. You got to bring in a lot of analogies from a lot of different media. The first 15 minutes of Casino Royale, where they’re chasing through the entire construction site. Jason Bourne, the way he runs, the way he fights other people. Those types of things we talked to people about, they were like, OK I’d love to play that – that would be fun. And then you say well it’s going to be in first person, because when you watch the movie it’s all in third person. And that’s where the challenge comes in.

This (points to the screen showing the trailer) is all directly taken from the game. The only thing we’ve taken out from a UI point of view is there’s a really tiny dot that goes in the centre. And the reason we kept that in the game is because we found that it lessens the motion sickness because you’ve got a point of reference, and also it gives people an aiming point so when you’re grabbing for a ladder or something like that, unless you want to walk up with a magic marker on your TV and put the dot in the middle, it helps you get there. There’s no other UI in the game whatsoever. We really wanted to do that to bring in that visceral feel.

VideoGamer.com: Will there be shooting elements, or guns that you can fire?

SD: There are guns but they’re tools. Imagine trying to do this running with a big automatic rifle – not going to happen. So, what you’re able to do is you’re able to take weapons off of people if you can disarm them in the right way. You can use whatever is in the clip but you can’t run very fast, you can’t do all the things that you really want to do. So it’s more of a tool to get through things, blow open a section of window, take out one person, throw it away and keep moving.

The game isn’t about combat, the game is about movement. That’s why it’s a tool. Battlefield, we love Battlefield, we love the success of it, but it’s both a blessing and a curse, because when you talk about DICE and people are like, oh yeah Battlefield I get it, but at the same time it’s like, oh but then you must be doing a first person shooter. No we’re not doing a first person shooter. This is an action adventure game and it’s really about the movement.

VideoGamer.com: So you have to overcome the challenge of convincing people of what you’re doing?

SD: Yeah. People that had only known Blizzard for Diablo and said, oh World of Warcraft or Starcraft or something like that, it would have never happened. That’s kind of where we’re coming from on this.

SD: We’ll talk about that during the summer.

VideoGamer.com: What about a demo on XBL or PSN?

SD: Again we’ll talk about that during the summer.

VideoGamer.com: What’s your opinion on demos? Some developers think they can have a negative effect.

SD: If you’re going to do a demo you have to do a good one and that’s all there is too it. It’s your movie trailer for your customers. Players are sitting there saying hey, this is something I really want to play and they are going to take the time to download this 2GB whatever and play it, so you have to do it well. Go big or go home, that’s my attitude at least. I use demos all the time. My Xbox is set for automatic download and on my PlayStation I’m always downloading things.

VideoGamer.com: When is Mirror’s Edge coming out?

SD: We’ll talk about that this summer as well.

VideoGamer.com: Can you narrow it down to a year?

SD: We’ll talk about it this summer.

VideoGamer.com: OK, Sean, thanks for your time

Mirror’s Edge is due out for PS3, Xbox 360 and PC sometime this century.