Metro Exodus is bright, bleak, and has a van 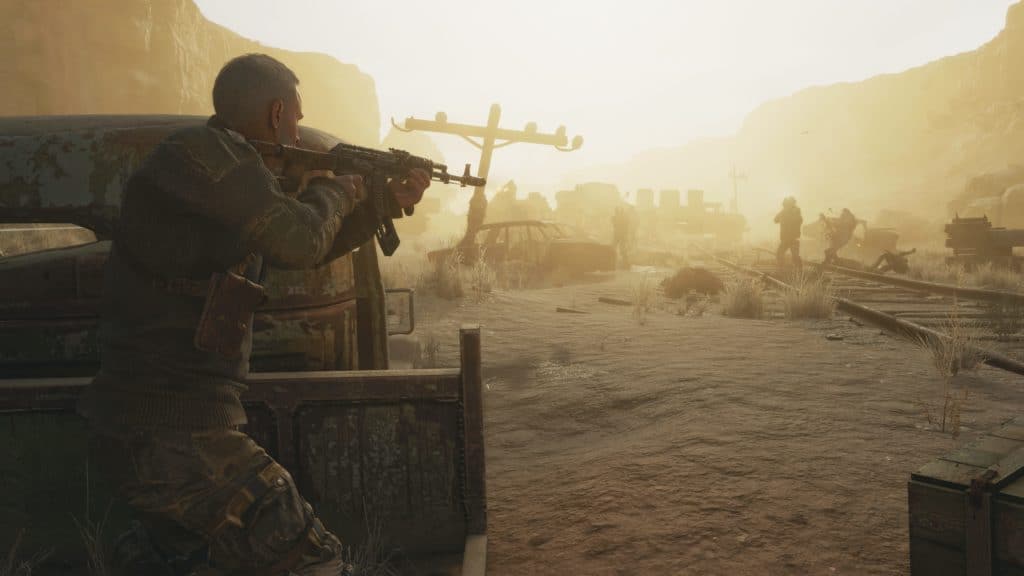 Generally speaking, when in an underground train network, one should avoid the light at the end of the tunnel. The Metro games, set in the railways underneath an apocalyptic Moscow, have needled us with this subtle subversion: hope is something to be feared, likely false and liable to flatten you. It’s with some trepidation, then, that I find myself above ground in Metro Exodus, in a bright world that seems – dare I say it – hopeful. Not only that but Artyom, the hero of the series, is taking it all in without the muffled sound and fogged vision of his gas mask. The whole thing feels like a Sudafed advert – ‘breathe deep,’ ‘long lasting relief!’

And it does last longer, owing to a hub structure that sees you alighting in open areas, taking on side missions, and either warring with or sidling round enemy factions. I recently spent a few hours with Metro Exodus, exploring three hefty sprawls. The first was set in winter, atop the Volga, the icy river that runs through Russia. The second was in summer, in the parched bed of the Caspian sea. The third, in Autumn, was in the Taiga, a dense forest of pines and spruces.

If there are any Metro fans out there rankled and wrinkling their noses at the thought of all this scenery, fear not: Metro Exodus is bleak. As I boated toward a church stuffed with cultists, a pale sun shivered in a watery sky. Even in the Caspian chapter, in the swelter of summer, the desert is smogswept, with greenish sandstorms and ghouls itching to spoil your fun. In other words, there’s no hope for Artyom finally getting that tan. 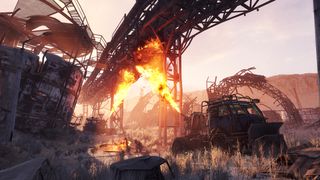 Is Exodus’ world something that was always on the cards? Was it something imagined from the beginning? I spoke with Dmitry Glukhovsky – the author of the Metro books, upon which the games are based – to see if Exodus matches up to his vision. ‘It doesn’t matter how it matches up with my vision, because I don’t have any vision,’ Glukhovsky said. ‘I don’t have a very rich visual imagination. But I think that this is a great extension; they’re (4A Games, the developer) building on what I created, and they’re building something amazing.’

Hang on a minute. How could a series with such a distinctive world not have been in Glukhovsky’s mind when he made it? ‘I’m not a visual guy,’ he explains, ‘Usually when I’m writing books I’m over-describing things, just to get an idea of what I’m looking at.’ Metro Exodus, on the other hand, is a more collaborative undertaking. ‘This is created by over a hundred visual artists, in continuity, engaged for years and years and years… but I just have my mind. My mind is quite limited… this is way better than I imagined it.’

Perhaps my own imagination is similarly stunted, because for all the wonder of the world-building, I’m held rapt by Artyom’s backpack. The real thrill of the Metro games is in the spirit of the hard-wearing and the makeshift – rifles held together with duct tape, bits of abraded metal warped into the shape of a shotgun, and Artyom’s cigarette lighter, fashioned from a 12.7mm bullet casing. These, I’m delighted to report, are present and correct in Exodus. My ambling progress through the three chapters was marked by crafting pit stops, where I chewed through scrap and churned out ammo and medkits. 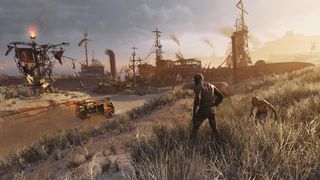 In between these breaks came shooting and sneaking, which is as compelling as ever. I opted to hang back with the Tihar rifle, firing not the usual ball bearings, but incendiary buckshot. Lighting up zombies from hidden positions in the desert was great sport, and getting up close and personal to clobber a cultist is a pleasure – one dutifully reflected in the Metro games. There’s no great change in this third entry, but fortunately Metro is a series where ‘more of the same’ resounds with reassurance, rather than fatigue.

Not to say there aren’t a few jolts to the formula. Another ramshackle joy I happened upon was a van with a bicycle handlebar stuck in the dash – all the better to cross the sandy expanse in good time. Driving is floaty and imprecise (any Forza fans looking for a dusty diversion will be sorely let down), but what the vehicles do is bring space and brightness to Metro, and its tone is unlike its predecessors. The rustly forest, filled with heavies to sleuth past, recalls The Last of Us. The desert is patrolled by thugs in cars with outfits embroidered with bones. Mad Max comes to mind.

These stony shades of influence should come as no surprise; as Glukhovsky himself has pointed out in an interview with VG247, the Metro games grew from the grim soil of Fallout as much as they did from science fiction authors like the Strugatsky brothers. In fact, its The Final Station — which was itself littered with references to the Strugatskys’ Roadside Picnic – that Metro Exodus’ seems indebted to. It’s structure, bound to the track of a trans-Russian railway, smacks of the same inevitability. 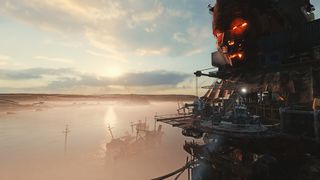 In Metro 2033 and Metro: Last Light, you scurried about the settlements, ferrying supplies from station to station and trying to make connections in the dark. The claustrophobia gradually gave way to a sort of candlelit cosiness. Why then, after gathering nuts for nuclear winter, should Artyom and his band of survivors emerge, like squirrels, squinting into the light?

‘From the very first pages of 2033, the book and the game, this has been a story of Artyom trying to fulfil his biggest dream,’ Glukhovsky says, ‘Which is to find other places on earth suitable for humans to live in, and bringing the remains of humanity from the suburbs of Moscow to other places on Earth to populate.’ Given that my time with Metro Exodus was chopped up and changeable, one thing I didn't get a hold on was story.

‘So this is the fulfilment of his dream,’ Glukhovsky says, ‘but there are a lot of questions, of course. Like, how come they didn’t know the world exists? Why are they the only ones on board that train? It’s called ‘Exodus,’ but there are just several of them on that train – where’s the fucking rest? A lot of these issues are discussed in Metro 2035. It weaves into it, it prepares you for that discovery.’

I asked Glukhovsky if Metro Exodus, then, is the real conclusion of the story, taking place, as it does, after the book. ‘So far,’ he answers. ‘If the game is successful with the gamers, then, you know, we have an idea of how to continue it. And it’s not gonna be, like, squeezing an idea just because it sells well. No, no, we know already where it should go after that.’ There you are, then – good news for fans crossing their fingers for more Metro games to come. There’s light at the end of tunnel.