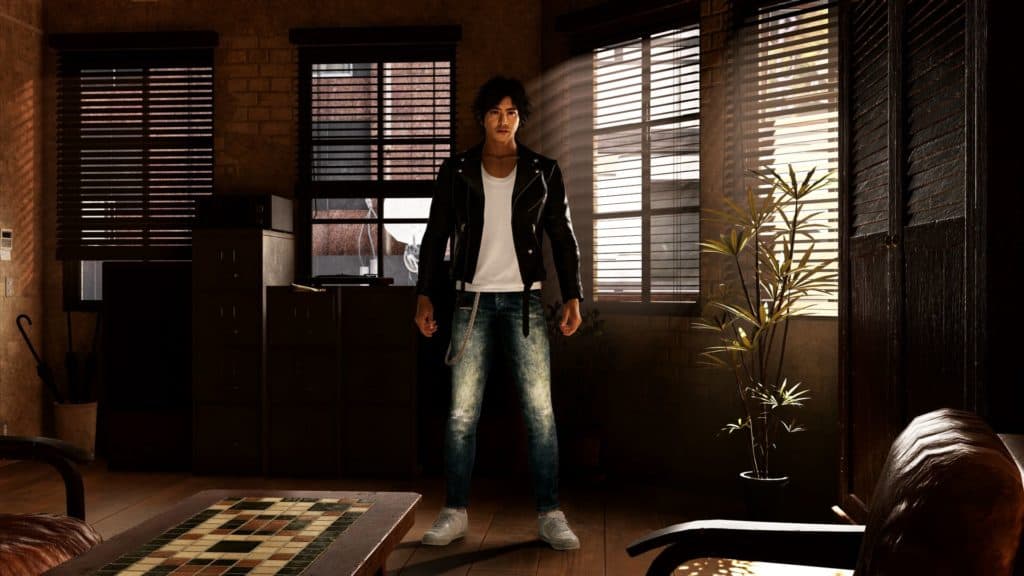 Think of a private detective. What you do you see? The stubble, the sarcasm, the smirk? The snub-nosed.38, the rumpled suit, and the cigarette, all furnished with a fedora? Such are the classic trappings of the private eye – that lone, luckless figure who steals through the shadows of film noir. I dread to think what Philip Marlowe would make of Takayuki Yagami, another private detective and the hero of Judgment, who hares along the boulevards of Kamurocho. His hair is a riffled mop. He wears a tight white t-shirt, jeans of pale denim, and a black leather jacket with enough zips to make Sora jealous. Yagami may not look like a classic sleuth, but he sounds it: ‘Here, bright neon lights make even darker shadows…’ he narrates, in typical noir style.

And he’s right. For years, Kamurocho, first conjured for the Yakuza series and now the setting of Judgment, has been a playground – a blinking babel filled with melodrama. But, what I’ve noticed from playing the game’s first chapter, is that Kamurocho has always been quietly simmering with hard-boiled, noir potential. ‘Down these mean streets a man must go who is not himself mean,’ wrote Raymond Chandler, in The Simple Art of Murder, an essay in which he outlined what the private detective should be. ‘He must be, to use a rather weathered phrase, a man of honor.’ Sound familiar? How about this: ‘He must be the best man in his world and a good enough man for any world.’ Is it just me or is Chandler describing Kazuma Kiryu, the hero of the Yakuza games?

As to whether or not Yagami – an erstwhile lawyer whose past is sticky with guilt and stricken with misfortune – fits the bill, the jury is still out. We find him, at the start of Judgment, collecting debts on behalf of the criminal Tojo Clan. ‘That doesn’t sound like a private eye… More like a mercenary,’ one character chides, and they have a point. Fortunately, the game’s sense of style makes up for our early uncertainty. The opening bustles with lowly business of the sort with which we’re accustomed: jostling through back alleys, brawling with throngs of thugs, etc. But one mission has us tailing a target, while a muted trumpet pipes up on the soundtrack, and something clicks. All of a sudden, the place takes on a noirish feel – the atmosphere, once arcade-bright, turns seamy. 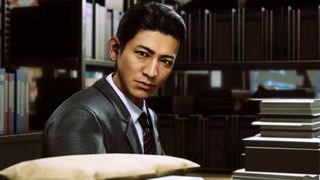 If you’re anything like me, you’ll be so eager to jump into Judgment and deliver a Crane stance spin kick to the nearest snarling head that you won’t have seen this mood shift coming. It’s a genre trojan horse, and credit to developer Ryu Ga Gotoku Studio for not overplaying its hand. The game starts off slow. In a flashback, we see Yagami in lawyerly digs: an office crammed with starched collars, ties, telephones, the swirl of smoke hanging in the air. It’s the sort of place that hums unnoticed in Kamurocho, two floors above the din on the street. On the evidence of the opening, I was wondering if Judgment might deliver a darker vision of Phoenix Wright – in which the law was laid down with fists and feet. Before long, we ping forwards to the present and find Yagami forsaking the bar in favour of a bar.

He’s not drowning his sorrows, rather pulling at the thread of a grisly murder. We soon meet Tsukomo, an informant cocooned in a cubicle in an internet cafe, who scrapes secrets from the internet and sells them to you. It reminds us at once of the buzz of those streets in Blade Runner, filled with people who trade in black market goods and sex. Soon after we meet Tsukomo, we fly a mini surveillance copter, the better to peer into the windows of a building; it brings to mind Ryan Gosling’s detachable drone, in Blade Runner 2049, unclipping from his car and zooming overhead for clues. We also spend more time on the rooftops in Judgment, and there’s an airy loneliness up there. It affords a different view of a familiar patch – and a tinge of tech noir. Kamurocho, with all that light and glass, is like an upturned chandelier; here, we feel along its dark edges.

I’m hardly expecting Yagami to tote a magnifying glass and wrap himself in a trenchcoat any time soon, and I’ve yet to pass judgement on the game as a whole. One thing that’s clear is that the fine-tuning of trickery – the drone, the tailing missions, a lock-picking mini-game – certainly makes a silhouette of it, cast backlit by the light of the Yakuza series. That it couldn’t exist without those games is obvious, of course, but it also couldn’t achieve its lacing of tonal subtlety without the mad noise of its forebears, soaked as they are in soap opera. The streets are as mean as ever, but they feel different than before. And while I’m not sure whether or not Yagami will supplant Kiryu as a fond favourite, the more intriguing proposition is this: Yagami might just be the best man in his world, because it’s one we haven’t quite seen before.