In Afterparty, drink allows you to say what you’re really thinking 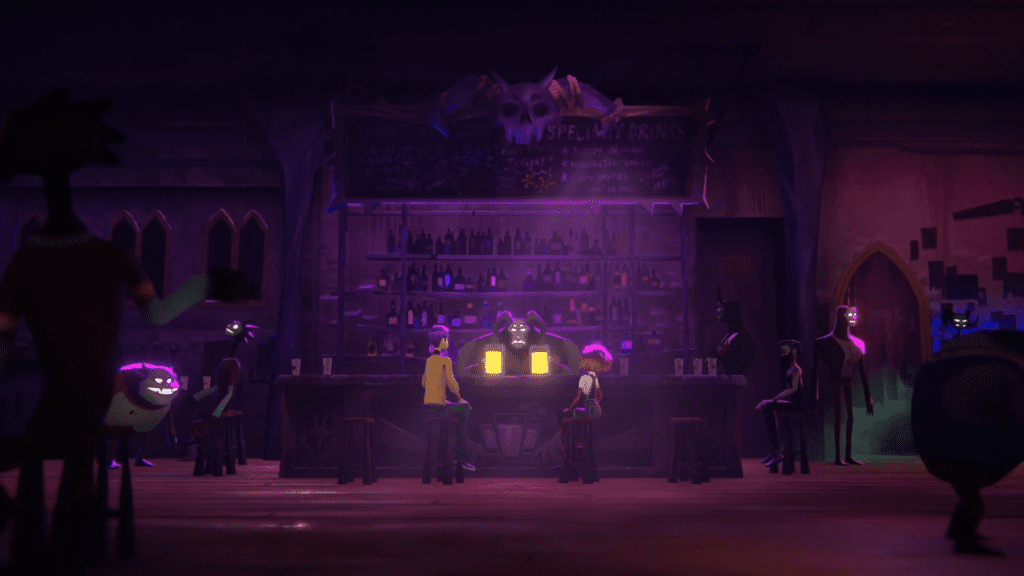 Someone once told me to drink at my own pace. I didn’t listen. Like many in their late teens, and in the company of older, more seasoned drinkers, I tried to keep up. Posturing in front of the effortlessly cool viking beards, and the impossibly pretty St. Tropez’d, never ended well. I got sick in the taxi on the way home, fell asleep on a stranger’s trampoline, broke my three-day-old phone by jumping into a fountain, and knocked over a table of full pints before falling into a fireplace. Drink at your own pace and nobody else’s. Unless you’re trying to get out of Hell, obvs.

In Afterparty, the new game from Oxenfree developer Night School, you play as Milo and Lola: two college graduates that have died and find themselves in The Bad Place. The pally duo don’t have to spend eternity here if they can outdrink Satan, though. A difficult task, because you learn early on that the Prince of Darkness is a divil for the booze; a lot of the demons are. They’re just like you: they need to let their hair down after a hard day’s torturing work, too, and thankfully can in the many bars dotted about Afterparty’s version of the netherworld. I was already super excited about the premise before I played a chunk at a recent preview event; I’ve come away buzzing. If they get it right, this could be really special.

Like Oxenfree (play it, if you haven’t), the story unfolds through free-flowing, interruptible conversation. Night School has nailed the meandering nature of chatting by giving you two contrasting dialogue options when a question is put to you, as well as plenty of instances to butt in or change topic. Communication felt natural and unrehearsed in Oxenfree, and Afterparty follows suit. Dutch courage changes things slightly by adding a third dialogue choice, though. 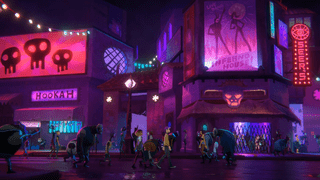 Dead and inducted, I sat Lola and Milo on the high stools of the first pub we went into and was offered four different concoctions by the barman. I had Lola and Milo down something fruity (I’m imagining a glass of Kia-Ora laced with sambuca). Whatever it was, it allowed me to tell an annoyance at the counter to fuck off – something I wouldn’t have been able to do if I hadn’t had alcohol in me. I didn’t get to properly test this out, but that third option changes depending on your poison. So, whilst I got confrontational, I might’ve had the chance to get flirty with them if I’d opted for one of the other cocktails. Afterparty promises variety in your drunken bullshit, so I can't wait to see how my mood changes if I have a sip of something else. It reminds me of The Red Strings Club (also a very good computer game that you should take a look at).

I am a little concerned about the writing, though. I don't have doubts about character development, or even the main plot; my main worry revolves around the humour. From the set-up, I’m sure you’ve gathered, Afterparty leans into comedy more than the developer’s debut game. With such a macabre setting, darker gags make sense, and it looks like Afterparty is going to keep that in mind throughout, but there was more than enough wiggle room in what I played. I should say that I've been watching a lot of Inside No. 9 lately, and whilst I'm not expecting anything as accomplished as the BBC black horror comedy, I'd like to think Night School will take some cues from how writers Reece Shearsmith and Steve Pemberton approach taboo subjects from a comedic perspective. It can be so effective if done well.

I mean, I definitely smiled a couple of times while people took jabs at each other in this banterful version of Richard Keys’ next stop, but it wasn’t until I came across a group of people celebrating a serial killer who’d offed 13 kids, late in the demo, that I became hopeful for more gallows funnies. The outlandish plot allows for mischief, so I’m optimistic that the full game will have a torrent of dark hahas… as weird as that may sound to some of you after I’ve mentioned the death of 13 children. They’re fake, cartoon children… ANYWAY, mini-games! 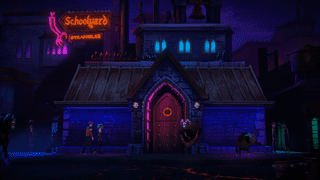 Aside from the walking and talking, I got to play a spot of beer pong with one of the pub’s patrons. Stood at one side of a long table, I aimed my bouncy ball towards those red cups I only ever saw in gross out films growing up, and sunk every throw.  Beer pong wasn’t a recognised sport in Ireland when I was growing up, but I picked the rules up quite quickly, because I'm quite an impressive athlete, dontcha know.

It was a nice break in play, and more drinking mini-games would be welcome if scattered throughout. There’s loads to choose from: Power Hour, Kings, Just Shut Up And Drink And Oh For The Love of God You Brought The Cards With You Okay Go On Then What Are The Rules.

There’s so much I didn’t get to dive into, like Lola and Milo’s backstory and the in-game social media that’s wonderfully called Bicker, but my time with Afterparty gave me enough to make me thirsty for more. The folks at Night School earned my trust with Oxenfree, so I’m ready and willing to go on the piss with them in Hell.

Afterparty is scheduled to launch in 2019 on PC, Xbox One, PlayStation 4, and Switch 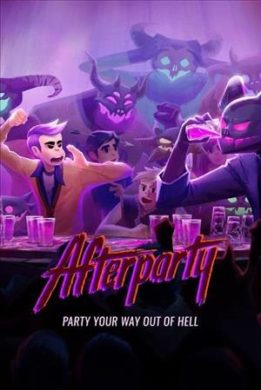