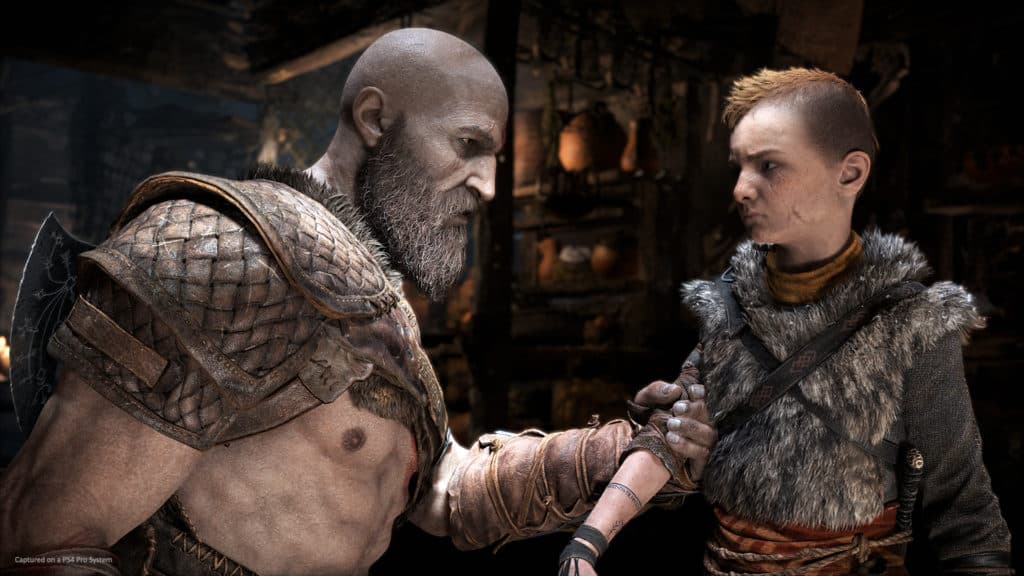 It's been five years since the eponymous anti-hero was last unleashed and now, once again, Kartos is back – and this time he's dadder than ever! God of War (2018) will never not be earmarked for me as Dad of War or, alternatively, and if you're in a fun mood, God of Dad. Kratos, knife-wielding god-killer and extremely angry man, has spent the years since he destroyed the entire Ancient Greek pantheon doing all the classic lumberjack dad stuff: growing a big beard, getting a bit huskier, appearing underdressed for the weather to the casual observer, and, crucially, raising a child.

God of War (2018) is both unfamiliar and familiar at the same time. The first two and a half hours, which we got to play at a preview in London, contains no quick time events or cutscenes, and mostly take place in the quiet, slightly melancholic winter forest you've seen in the previews. Kratos and his son Atreus are preparing to ascend the nearby mountain, but neither of them are ready for the experience. This God of War is immediately more mature than you might expect from the series that once featured a press X to give a Greek goddess an orgasm QTE. Kratos and Atreus' relationship is a tense one: Kratos seems to be a mixture of proud, annoyed and even slightly afraid of his son, whilst Atreus is definitely afraid of his father but shows some signs of adolescent moodiness at how unfair the whole situation is (at one point, after telling Atreus to track a deer, my Kratos wandered off exploring in a different direction, and I was met with a distinctly sarcastic 'Or we could just follow you?'). There are no grandiose cinematics, just cutscenes that rise smoothly out of the gameplay and fall back into it, with your attention directed by the camera gently pulling focus from Kratos to his son and back again.

At the same time, God of War was never known for subtlety, which is why in the opening couple of hours you'll engage in fights with toweringly giant enemies, split the ground apart into a giant new ravine, rip trash mob enemies in two with your bare hands, and witness Kratos somehow being simultaneously deathly silent but also extremely dramatic over not knowing how to express his manly feelings or comfort a frequently sad Atreus.

Speaking before the event, director Cory Barlog talked quite philosophically about how people change over their lives, and said that the animation director on the current God of War compared the first games in the series to their 'college years'. Barlog jokingly described him and original combat designer Eric Williams as being 'arrogant bastards' and that, together with David Jaffe, they had a chip on their shoulder and 'kind of all had this idea that we were going to take the industry on'. But the times, they are a-changing. 'I'm at a different phase in my life, and what I'm seeing, actually, of the industry, is games are changing dramatically, right?' he said. 'We as game makers are all in a different phase of our lives, we are looking at things through a different lens and games mean so much more to us, and we feel like we want to actually put a lot more into what we're doing.' Barlog wants this God of War to be something he can be proud of and, one day, sit down and play with his own son.

There isn't just added emotional complexity on display, though. Kratos has ditched the twin blades and is now wielding an axe, which has two rune slots for different special attacks, a slot for different grips, and an overall level. There's also a shield, and three different armour slots, and Atreus, who helps in battle with his bow and arrows, also has slots on his weapon and armour. There's a skill tree for different melee and ranged attacks, too. It's all kicking off. But these additions, though they add more considerations to the combat, don't lessen how brutal it feels, and in fact you can make your fights as simple or as complex as you like. It's possible to juggle an enemy in the air, switch to unarmed combat to smash them back down, and then flip back to using the axe again for a finisher. Or you can just keep slamming that blade down like a butcher splitting pork chops.

It does pay to think a little more tactically, though, especially now that the combat camera tucks in a lot closer behind Kratos than in previous entries to the series. It's easier for enemies to sneak up behind you, so getting the hang of controlling the camera for the quick 180 turns (which are button mapped) as well as listening to Atreus call out enemy approaches seems to be key. The partnership between father and son is folded in on the combat too: there are some enemies that Kratos can only hit once Atreus has shot them to get their guard down, and Atreus can also pull aggro on enemies to give his dad breathing room. At the same time, the baddies can grab Atreus and injure him, so War & Son have to look out for one another.

There's also a healthy dose of puzzle solving to contend with, some of which requires Kratos and Atreus briefly split up, while others involve Kratos throwing his magical boomerang axe at different mechanisms (boomeraxe? Either way it's truly a delight the first time you try throwing and recalling it in combat and realise all the things you can do with it). The new Norse world that you're exploring isn't exactly an open one, but it's not exactly linear either, and more often than not you're rewarded with a new puzzle or collectible for exploring what is a lovely, decaying world with extremely well designed set dressing.

The preview contained enough glimpses of surprises and cool plot points to suggest that God of War hasn't anywhere near shown it's full hand yet, but at the same time the character development was packed in pretty densely for such a comparatively short slice of a big game. Let's hope that it can keep up the momentum all the way through, as well as be brave enough to deliver a gut punch of real dad-feels by the end. If it can then it's well placed to become one of those fabled unmissable titles. A post-The Last of Us Dad-God.