For Honor: meaty multiplayer with the potential for meta-games - VideoGamer.com 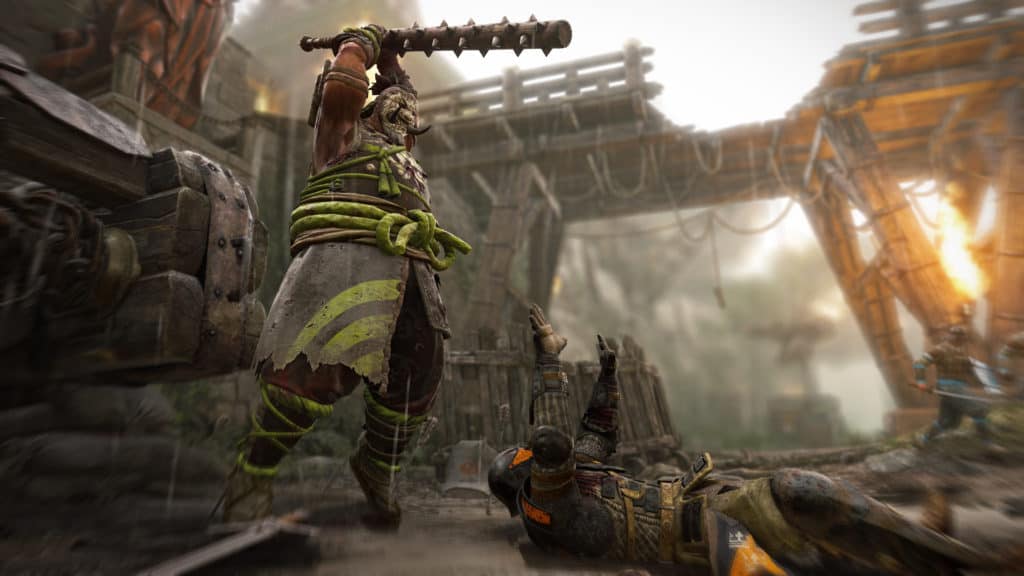 For Honor: meaty multiplayer with the potential for meta-games

I wasn’t that intrigued by For Honor until I saw it presented on stage at the Ubisoft E3 conference by Jason Vandenberghe, a man who appears to be a cross between an actual viking and a late 18th century raconteur. He strode on stage with a cane, mane of grey hair pulled back but ready to be unleashed for an impromptu headbang at a moment’s notice, giving forth many hearty ‘Haha!’s and ‘Aaaaah!’s of approval at his own game. He sounds like that guy who narrates film trailers, except that’s his voice all the time because he’s well into medieval warriors smashing each other up with axes and he gets to make that happen as his job. For Honor ended up on my upcoming games radar, a blip with a subheading of ‘that one being made by that dude, kind of looks like European Dynasty Warriors maybe?’

It is, of course, not really like European Dynasty Warriors. Despite Vandenberghe showing off the single player campaign at E3, the hands on time I had with For Honor would indicate it’s definitely a multiplayer game. If you don’t like multiplayer games, which is a valid stance, and someone tries to sell you on For Honor on it having a rich single-player campaign I would suggest at this stage that you not buy that. It’s not that it doesn’t have a single-player because it demonstrably does, and I can’t tell you how long any of the three campaigns in it are, but the single-player missions I played felt less substantial. All the meat on the bone – that of a giant lamb haunch to be brandished in one hand while you celebrate in a mead hall with your fellow warriors – seems to be the multiplayer features.

There are three multiplayer modes, two 4 v 4 team ones and a 1 v 1 duel. Dominion, a team match where both sides must fight to maintain control of three points on a fortress map in an attack/defend scenario, is the most fun. Each side is backed up by a charge of NPC soldiers to make it harder to push straight through, and the winning and losing sides can turn on a dime. In some respects Dominion is a bit MOBA-y, and it’s great shouting tactics over the headsets: “You grief in the middle lane and I’ll sneak around to capture point C”.

But while Dominion was the most fun, Elimination and Duel were more interesting. In these you’re dropped into Wasteland maps, which are more ruinous and reclaimed by nature, either in a straight duel in, er, Duel, or starting the round squared up against a singular opponent while your teammates are in the same pickle elsewhere on the map. In these modes you can see not only how balanced the different classes are, but also the complexity in the control system, which is slow and deliberate in its execution.

You must guard in the direction your opponent is attacking from, and attack in a direction they’re not guarding from. Then you layer in your stamina depletion, then parrying, then rolling, then guard breaks, special abilities, grapples and throws… Each class has its own moves and handles differently. Throwing in the variable of player skill, along with the perennially fickle mistress luck, and anyone has the potential to beat anyone else. No two rounds will play out the same: I won a match by kicking the guy into a fire, without even meaning to. At the same time, trying to figure out all the movesets and remembering everything I could do felt a little impenetrable, and it took quite a while before I felt really comfortable with it. For Honor doesn’t feel like a game you can play casually.

For Honor will also have a cross-platform feature. You won’t be able to play with someone on PC if you’re on PS4, but all the activities across all platforms contribute to a shared world state in something called the Faction War. You can pledge allegiance to one of the factions (Vikings, Knights, or Samurai) and over a season, which takes 10 weeks in total, the factions will vie for control of different areas. At the end of a season the maps will change to reflect which faction managed to control them. It’s an interesting prospect.

Taken all together it means For Honor has the potential to grow in fascinating ways once it’s been released. It could easily develop an unspoken set of meta-game rules over time, impenetrable to newcomers and never intended by the devs, but pinned to the top of a blog somewhere and observed by players. You’d get grief for breaking them until someone was kind enough to explain. There could be a buddy system like the Sherpas of Destiny. The different factions could easily grow, mushroom like, into a network of forum groups and subreddits marshalling the attacks of players over different platforms to optimise multiplayer gains. There will be some players who rage quit matches, complaining the tactics their opponents used are cheap. There will be yelling into headsets. There will be let’s plays where a youtuber stays in character as a viking the entire time.

There are some niggles that could benefit from streamlining, but For Honor could ultimately end up being as good or as terrible as the people you meet in it. There’s a wide gulf to be found there, of course, but at this point it does seem to provide interesting systems to navigate it with. I saw a match end because one player got knocked off a bridge right at the start.