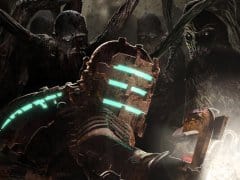 The survival horror genre was in need of a shake up a few years ago and Capcom’s Resident Evil 4 did just that. Since then we haven’t really had a game that’s come close to challenging the mighty series, but EA might be the company to do so. Dead Space has been labelled ‘Resident Evil in Space’ by some, so we caught up with Chuck Beaver, Senior Producer, and David Yee, lead gameplay engineer to find out how EA went about creating a survival horror game and if game development has changed over the years.

VideoGamer.com: What was your approach to the horror content in Dead Space?

Chuck Beaver: With the horror design of Dead Space, we’re trying to be true to the horror genre in film. We have a lot of psychological scares and psychological drama set up across the entire game, and as we’ve got 20 hours to get through it can’t be the same jump-out jump-out jump-out joke every time! That would get old really fast. So we found ways to systematise the scares. We have a fear system attached to the sound, so we can turn that on or off. And we also have a vent system, where if an enemy sees you in the distance it can climb into the air ducts and pop out anywhere close to you. So you think you may be safe, and then suddenly things are appearing all around you.

VideoGamer.com: So that’s all totally unscripted?

CB: Yeah, it’s procedural. So say you’re running away from something – you run into a room and you think you’re safe. But if there’s a vent in there, you’re not! You can’t really get away from the enemies at any point in time. So that’s one of a number of procedures we have for fear. The big one we have is the immersion idea, that you’re never stopping the action during play. That’s especially important for things like the HUD and your inventory – we want to keep you immersed in the game, so there’s never a moment when you can take a breather. Also, the combat is lethal – if the enemies get a hold of you, you’re dead. You can’t just stand there and let things happen. So once you figure out that the enemies are lethal, and there’s no pausing, the game becomes very tense. You’re afraid about what’s out there. So that’s one of our biggest fear factors: the fact that you’re crawling around every blind corner, nervous about what’s going to happen.

VideoGamer.com: How much time has been spent on balancing the pace of the game? Too many scares tend to actually reduce the fear factor in games like these, but equally if they’re too infrequent then it lets the player relax, right?

CB: Absolutely. We started out with a lot of “boo!” moments, with things jumping out at you, or coming out of the ceiling. But then we realised they can get really old.

David Yee: That’s with the more traditional scares. But to get back to what Chuck talked about with the systems… On the engineering side of things we tried to build out lots of level mechanics and games systems that our designers can play around with, try things out. So we actually had situations where level designers would get together every week to show off their new level. Since everyone’s so immersed in their own stuff, a lot of the time they wouldn’t normally get to see the levels that other people have created. So we all get together in a room that’s very dark and has this great sound system, and people can try out each other’s levels – see which ones are scary and which aren’t really working. So that helped a lot in terms of trying to mix things up, not using the same tricks all the time.

VideoGamer.com: Does the fact that you have so many level designers create additional challenges on a game like this? How do you ensure that the game remains a single, unified experience?

CB: That’s really the task of our creative director (Bret Robbins). He’s the one who’s filtering all the input and deciding what gets stuck together in the final experience. Like Dave said, there’s always a mix of what’s working and what’s not working and that gets filtered through by the master creative team.

DY: We’ve had daily play-throughs of the game. The creative director plays, and it’s basically his job to constantly be on top of the game and to know it from start to end.

VideoGamer.com: Game development is getting more and more expensive. Do you think there’s a lot of pressure on projects like this that the increased budget has to be immediately reflected in sales?

CB: Yeah, it’s fair to say that the pressure is enormous, with the current state of things! We’re in Northern California, it’s a very expensive place to build games, and there’s huge pressure to outsource as much as possible. The comic industry has been doing it very successfully for decades, right? They’ve been in Korea and India and everywhere with these outsourcing models, and we’re going to have to follow that pretty fast. We have to work out which bits of our games can be outsourced and which have to stay in house for creative control. We’re already on a path to get there. But yeah, we live or die by our numbers as a studio, right? If the game doesn’t sell… It may be a big critical hit but if it can’t financially stand up on its own, it’s not going to make it.

VideoGamer.com: So is that pressure having an effect on the way games are made across the industry?

CB: Absolutely. It’s kind of weird even that there’d be such an explosion in new intellectual property, given that’s its so risky. It kind of flies in the face of all that. I don’t really know if people feel like licensing has run its course, that’s where it’s all done now. You go on with more of the wholly-owned properties. The ideas are fresher, the creative heights you can get to are stronger and you build your own solutions to problems – so it’s a risk you’re willing to take.

DY: The interesting thing too that we’ve talked about a little bit is our new CEO John Riccitiello. He’s been our CEO for almost two years now, right? It’s been 15 to 18 months, something like that. Interestingly enough, one of the tenets he wanted to bring in when he took over was to focus on quality. A large focus on quality, and a large focus on trainee, fledgling titles. It was easy from our standpoint on the ground to be like, “Well, we’re not really too sure. This new guy just came back in” [to the company]. But we’ve really seen that, over the course of Dead Space. A few years ago Dead Space would have been… there’s no chance it would have happened. And we’re seeing lots of other opportunities where people are able to explore doing new and original IP, which is really exciting.

VideoGamer.com: Why do you think EA is taking that direction now?

CB: A lot of it is… It kinda boils down to the numbers. If you look at the actual financials behind the intellectual properties, we’re not paying the license fees out, like on some of the previous properties we’ve had. Because of course the royalties go out the door on those and that affects your return, your final turnover. So we’re trying to become more efficient. The other reason is, “You know what? Let’s make our own properties. Let’s own these things.” And now EA is also awakening to… It’s kind of been a dormant fact for a long time, but we’ve already got properties in house – intellectual properties like that can be farmed to other media, like movies and comics. So EA is getting wise about monetising its properties, and owning more of them.

VideoGamer.com: Is there more of an appetite for that kind of thing now?

DY: I think things have improved a lot. The gaming industry had become such a huge thing, right? It was only a few years ago that the games industry surpassed the movie industry in terms of revenue, and so that was definitely something that… well, people noticed it. “Hey, this game industry is here to stay, it’s not just a bunch of old kids playing. It’s mass market.”

CB: Especially with things like ComicCon. Over the last couple of years the cross-media have just taken off, and we’re a part of that.

VideoGamer.com: Are games more respected as a medium, these days?

CB: I would think so, especially when you’ve some of the MMOs going out to 10 million subscribers…

DY: You’ve got some serious mainstream crossover going on now.

VideoGamer.com: Okay, our last question is a two parter. First up, we’ve heard that Dead Space has already been banned in some countries, including Japan – is that true?

CB: We haven’t been banned anywhere yet, but you have to get rated by government in order to sell, and we’re having difficulty getting ratings….

VideoGamer.com: OK. While we’re sure from a sales point of view you’d like the game to be available everywhere, are you quite proud that you’ve managed to come up with something so messed up that some people won’t touch it? Or are you thinking, “Eesh, we shouldn’t have done that!”?

CB: [Laughter] Yes, you could say that! We were going for our M rating in the United States, we wanted a real, true-to-the-horror-genre game we could put out – and the fact that it’s got some controversy is an indicator that we’re exactly where we wanted to be.

Dead Space will be released for Xbox 360 and PlayStation 3 on October 24. The PC version will follow on October 31.