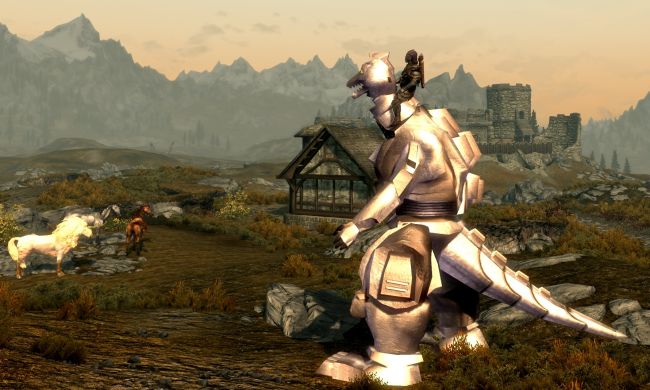 You can ride Mecha Godzilla in this new Skyrim mod

Bored of your regular mount in The Elder Scrolls V: Skyrim and fancy a change? Then maybe you should have a gander at a new mod by 'gg77,' which allows you to ride an actual Mecha Godzilla as part of the Godzilla and Company pack.

Aside from the mechanical monstrosity, this latest Skyrim mod also gives you the chance to mount the bog-standard Godzilla as well as Rodan.

Don't expect to rampage across the chilly winter wonderland of Skyrim though; the Godzilla mounts are just used for travel, and can't actually be used to batter enemies with. Still, if you want a laugh you can create dozens of cute little baby godzillas by using the incubate egg feature. Aww.

If this tickles your fancy, you can download Godzilla and Company here.

The Elder Scrolls V: Skyrim was originally released on PlayStation 3, PC, and Xbox 360 in November 2011, and has since been ported to pretty much everything out there since. We're not kidding either; there's even an Alexa version of the epic fantasy romp up for grabs.

Still, if you're fed up with all the re-releases, then Todd Howard has a very simple solution for you.