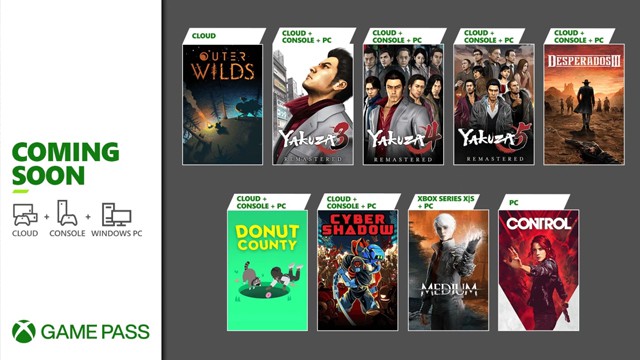 Xbox has announced the next round of additions to Xbox Game Pass for the rest of January, and it’s great news for Yakuza fans as the Yakuza Remastered Collection heads to the Xbox for the first time.

Then, on January 28 the heavy hitters arrive. First up is Bloober Team’s The Medium which is set to scare Xbox Series X|S and PC owners as it launches on Day One onto the service for those two formats, and it’ll be joined by The Yakuza Remastered Collection comprising of Yakuza 3: Remastered, Yakuza 4: Remastered and Yakuza 5: Remastered meaning almost the entire Kiryu saga will be playable on Xbox One, Xbox Series X|S and PC for the first time; the lone exception being Yakuza 6: The Song of Life, which is set to arrive on the subscription service this March.

The end of the month will naturally also see several titles leaving the Xbox Game Pass service, so make sure to get your fill of Death Squared, Death’s Gambit, Final Fantasy XV, Fishing Sim World: Pro Tour, Gris, Indivisible, Reigns: Game of Thrones and Sea Salt before they depart the service on January 29.