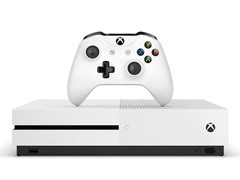 Xbox One S boosts Xbox One sales by 75%

The arrival of the new Xbox One S saw Xbox One console sales increase by more than 75% in the UK last week, according to a report by industry mag MCV.

The slim 2TB console sold out almost immediately upon its release last Tuesday, August 2, with stock now not expected to be replenished until the smaller 500GB and 1TB SKUs arrive later this year.

The exact number of Xbox One S units sold has not been disclosed.

“We’re excited by the reaction from fans for the Xbox One S,” a Microsoft spokesperson told VideoGamer.com earlier this week. “While stock of the 2TB has sold out, gamers can pre-order the Xbox One S 2TB Gears of War Limited Edition console. We will be sharing further details on other Xbox One S bundles and variations in the coming weeks.”

The Xbox One S features a 40% smaller design over the original Xbox One, plus an integrated 4K Blu-ray player and HDR support.

The 2TB version will be re-released as a special edition Gears of War 4 console on October 7, although UK release dates for the 500GB and 1TB versions have yet to be announced.