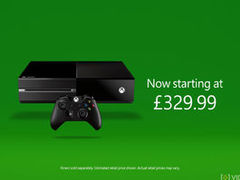 Xbox One has had another official price cut in the UK

The reduction marks the third price cut in 10 months for the console, having originally launched for £429.99 in November 2013. It also makes it cheaper than PS4, which still officially retails for £349.99.

The £329.99 SKU does not include a Kinect sensor or any additional games.

The price was first revealed at the end of a new advert for Forza Horizon 2, with prices updated on the Microsoft Store and other retailers.

A bundle containing a digital copy of FIFA 15 is due to launch this Friday, September 26, for £349.99, with a White Xbox One containing a copy of Sunset Overdrive arriving on October 31 – available for only £329 at Amazon.

“We are always looking at ways to offer the best value for our customers,” Microsoft said in a statement provided to VideoGamer.com. “This is a UK only retail promotion which coincides with our upcoming releases including Forza Horizon 2, Sunset Overdrive and Halo: The Master Chief Collection.”