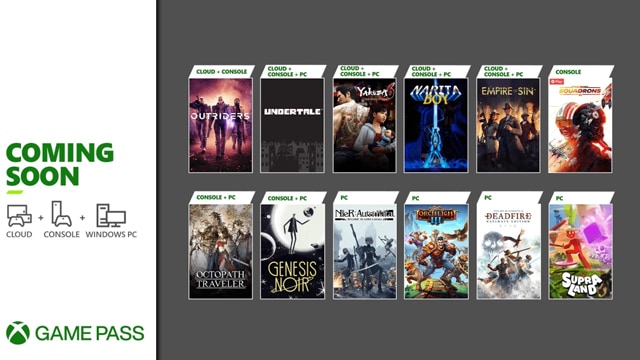 Xbox has detailed the next batch of games coming to Xbox Game Pass subscribers for the remainder of March, a mix of big name games previously announced and a few potential surprises make it one of the most varied bunches in a while.

First off the bat is the previously announced Undertale, which heads to the Xbox for the first time today and will also be available via the Cloud and PC. Then on March 18 isometric gangster strategy Empire of Sin lands on Console, Cloud and PC. It’s joined by RPG Nier: Automata and dungeon crawler Torchlight III both on PC on the same day, while Consoles get Star Wars: Squadrons via EA Play & Xbox Game Pass Ultimate.

March 25 sees a pretty hefty drop of titles; noir adventure Genesis Noir and eight-protoganist RPG Octopath Traveler kick things off on Console and PC, followed by Pillars of Eternity II: Deadfire – Ultimate Edition and Supraland on solely the PC version of the service. Finally for that date, Xbox owners finally complete the Yakuza saga as the last remaining mainline title Yakuza 6: Song of Life finally makes its way to the Xbox (completitionists note: spin-off Judgment will still be coming in April) and will be available on Game Pass for Console, Cloud and PC.

March 30 will see retro-styled action adventure Narita Boy added to the service on Cloud, Console and PC and finally for this month (or technically the first release of next month) the previously-announced Outriders will launch on Day One onto the Xbox Game Pass service on Cloud and Console.

As for titles leaving the service, there’s not too many this time but you’ve got until March 31 to play through Hyperdot (Console and PC), Journey to the Savage Planet (Cosnole) and Machnarium (PC) before they’re gone.