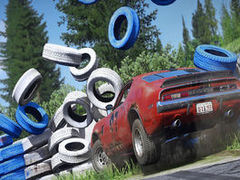 Demolition derby racer Wreckfest is heading to PS4 and Xbox One in 2017, developer Bugbear Entertainment has announced.

While exact details on the console versions have yet to be announced, fans who pre-order the game via Bugbear’s website will be given access to the game’s beta on PS4 and Game Preview on Xbox One, with the full game expected to release digitally in spring 2017.

Three pre-order tiers are available, with prices starting from $19.99. Take a look at the image below to see what you get for your money:

Wreckfest is considered by some as a spiritual successor to Bugbear’s previous series FlatOut, and sees players causing carnage in races and demolition derbies. The game first launched on Steam Early Access a few years back.

In addition, Bugbear has also announced a new PC project called Stuntfest described by the developer as “a wacky vehicle-based physics playground that will enable you to create your own mischievous levels using the easy-to-use in-game editor and then trying to accomplish all sorts of crazy ragdoll stunts”. A range of vehicles are promised from mobility scooters to shopping trolleys.

The game is scheduled to release in early access this autumn, with pre-orders starting from $15.99. For a look at what to expect, check out the teaser video below.

Wreckfest, previously known as Next Car Game, is a new demolition derby…

Wreckfest, previously known as Next Car Game, is a new demolition derby…