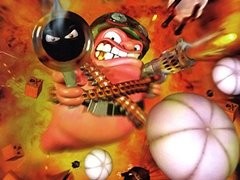 Team 17’s hit strategy franchise ‘Worms’ has racked up over 70 million sales and downloads since launching in 1995, the publisher has revealed.

The figure includes the number of units sold across all games in the series, along with free downloads from its mobile titles, Games with Gold and PlayStation Plus.

The milestone was announced in preparation for the company’s 25th birthday next Monday, December 7, which it plans to celebrate with a sale across a range of digital platforms, including the Xbox Games Store, PlayStation Store, the App Store and Steam.

It also plans to give out games and free merchandise in daily promotions throughout December, too, with codes for Xbox One game Overruled and the Steam version of Beyond Eyes having already been posted on its Twitter account.

Worms first launched on Amiga over 20 years ago, and has spawned a range of spin-offs and sequels since. The most recent entry, Worms 4, launched on mobile platforms earlier this year. Worms WMD, meanwhile, which adopts a brand new “cartoon-inspired’ look, is due for release on PC and Xbox One early next year.