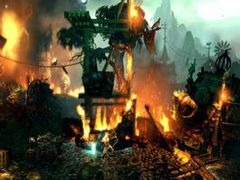 The Wii U is capable of displaying Trine 2 expansion Goblin Menace with the graphics as intended, something developer Frozenbyte believes isn’t possible on Xbox 360 and PS3.

Speaking of Goblin Menace, included as part of Trine 2: Director’s Cut on Wii U, sales and marketing manager Mikael Haveri told NintendoLife: “Basically that does require… well, not huge amounts more graphics processing power, but still considerable. If we would publish that on the other consoles, then I believe that there would be some small downscaling of what it is right now.”

Mikael Haveri also explained how quick and easy it was to get Trine 2 up and running in Wii U.

“I think we didn’t start really until sometime early in the year still, but the fact was that we had a lot of things going on. Then when we got over the old things, we started with the Wii U and then in two days we had it running,” he explained. “We had it running really fast. So it was more about knowing your own tech and then having that ‘eureka!’ moment of making it work on this new hardware.”

Set to launch alongside Wii U on November 30, Trine 2: Director’s Cut features the acclaimed original game with numerous enhancements and gameplay polish, the Goblin Menace expansion, plus a new game mode called “Magic Mayhem” designed exclusively for Wii U.