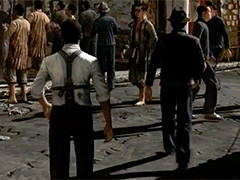 by VideoGamer.com Staff on Aug 2, 2013
No Comments

VideoGamer.com has acquired the first ever gameplay footage of Team Bondi’s troubled next-gen project Whore of the Orient.

The exclusive footage, supplied to us by a trusted source, offers a first look at the lead character, combat, gunplay and city of the open-world action title, which previous publisher Warner Bros. is rumoured to have dropped in late 2012.

The Australian government granted $200,000 to the project in June following alleged lay-offs at the development team earlier this year. KMM is still thought to be seeking a publisher to back the project.

Brendan McNamara, writer and director of Whore of the Orient, has previously described the title as “one of the great untold stories of the 20th century”.

For a selection of screengrabs from the footage, head through to our gallery.

Whore of the Orient

The next title from L.A. Noire’s creator Team Bondi.

Whore of the Orient

The next title from L.A. Noire’s creator Team Bondi.