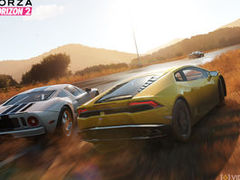 Forza Horizon 2 will feature expansive endgame content, according by comments made by creative director Ralph Fulton, including an all new option introduced after the credits roll that lets the player decide where to take the race to next.

In fact, the feature list is so expansive, Fulton says, that once you “complete the game” around 12-15 hours in, you’ll have only seen around 15-18 per cent of the game.

“We’ve actually just got a lot more in Horizon 2 than there was in Horizon 1 in terms of content and features,” Fulton told VideoGamer.com earlier this month. “We’re introducing stuff for hours, basically. But after about 90 minutes we’re happy to let you off the leash. A funny thing happens in this game which didn’t happen in the original, and I think it’s just due to scale and the amount of stuff that’s in here. After being led along quite deliberately for 90 minutes, there’s a point where we go what happens next is up to you. For me the game comes alive at that point.”

He continued: “In fact, when you ‘complete the game’ – and I use air quotes there – when you become the champion, you’ve seen the credits… you’re 15-18% into the game. What’s great is at that point a new feature is introduced. So you’re like 12-15 hours into the game and we actually change it then so that you’re in charge of the Road Trip, this big event that happens. Suddenly you choose where it goes, you choose the next destination, and from there there’s still so much content, so much more to find and explore.”

There’ll also be cars hidden around the game world for players to find in the way of Bucket List Challenges, a series of challenges with specific objectives and themes. 30 will be available day one with others set to roll out regularly shortly after launch.

And even once you complete all the content available on disc, Playground has plans to “expand the experience” by way of future DLC.

“We are definitely looking at ways to expand the experience as we go forward,” Fulton adds. “I think that’s one of the strengths of Forza. We do support our games post-launch and you’ve seen that perfectly with Forza Motorsport 5… almost continuing to justify that purchase that people made on day one. I absolutely envisage without giving you any specifics that that’s something we’ll continue to do in Horizon.”

Forza Horizon 2 launches on Xbox One and Xbox 360 on October 3.