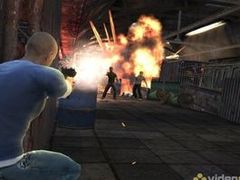 Midway and Ubisoft have announced that Wheelman has gone gold for the Xbox 360, PS3 and PC.

In Wheelman Vin Diesel stars as an undercover agent and highly skilled driver who must infiltrate the Barcelona underworld to gather intelligence surrounding a covert heist. Posing as a driver-for-hire, he ends up caught in a crossfire of corruption and chaos while trying to stay one step ahead of local law enforcement and rival gangs.