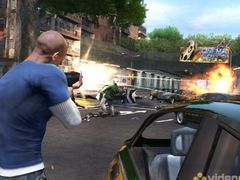 Microsoft has announced that a playable demo of Midway and Ubisoft’s open-city action title Wheelman is now available to download from Xbox LIVE Marketplace.

The demo comes in at 1.31 GB and features a small sample of the Wheelman story mode, plus two of the game’s 105 side missions. You can add the demo to your download queue by following this link.

Wheelman is scheduled for release on Xbox 360, PS3 and PC on March 27.