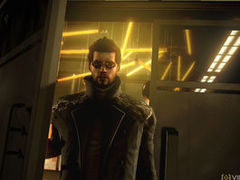 Square Enix is celebrating a second week at the top of the All Formats All Prices UK video game chart, despite a 46 per cent drop in sales over its debut week.

Despite the large, but quite common sales drop for Deus Ex, Ubisoft’s Driver: San Francisco could only manage second place with the Xbox 360 version taking 53 per cent of total sales.

505 pair Zumba Fitness and Rugby World Cup 2011 are each down one place to No.3 and No.4 respectively, while Disney’s LEGO Pirates of the Caribbean is also down to No.5.

The only other new entry is Codemasters’ Bodycount which miss-fired and managed to sneak into the Top 40 at No.36.

5. LEGO PIRATES OF THE CARIBBEAN

19. CALL OF JUAREZ: THE CARTEL

Ubisoft can’t be overly pleased with its No.2 debut for Driver: San Francisco, but the true test will be how long it can hang around the chart upper echelons as new releases hit store shelves. For Square Enix it appears to be a job well done for Deus Ex, but we won’t know exactly how it has done until the firm publishes sales figures.

Friday sees the release of Resistance 3, Star Fox 64 3D, El Shaddai, Space Marine, Dead Island and Rise of Nightmares. We expect Resistance 3 and Dead Island to perform well, each with a good chance of displacing Deus Ex at the top, but Space Marine and Star Fox should also compete for Top 10 places.