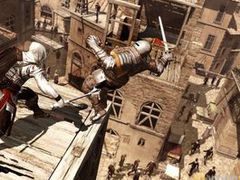 Ubisoft appears to have unceremoniously dug a shallow grave for the permanent internet connectivity requirement of the controversial DRM in the publisher’s PC titles.

The publisher has not officially confirmed a newfound relaxed stance, but users on Reddit (and spotted by PC Gamer) found that their copies of Assassin’s Creed II and Splinter Cell: Conviction were playable without active internet connections.

In the past, Ubisoft’s PC games would pause if the user went offline. An active internet connection is still required to validate the game when being installed, which has become standard practice for PC games in the last couple of years.

Ubisoft has already turned away from its DRM system, adopting Valve’s well-received Steamworks for the PC release of R.U.S.E. in September 2010.

Ubisoft’s DRM has caused a torrent of bad publicity for the studio, peaking when Ubi’s DRM servers crashed (after being attacked by disgruntled hackers) and left the PC version of Assassin’s Creed II unplayable for legitimate customers shortly after launch.

Pirates were left largely unaffected by Ubisoft’s DRM, as the system was cracked shortly after its launch.

Ubisoft’s DRM was hugely unpopular with gamers, and these relaxed restrictions can only be a good for anyone looking to play their games on the PC. We’d recommend the publisher stick to Steamworks for future titles, however.