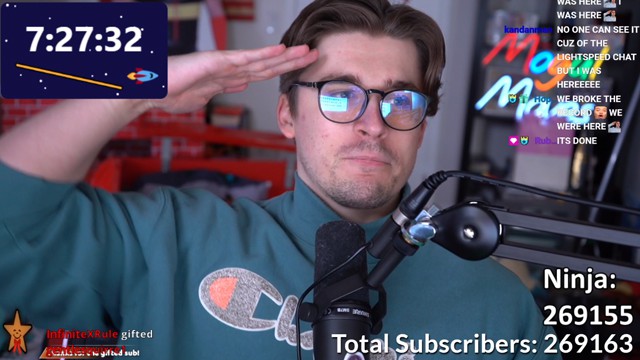 American Twitch streamer Ludwig Ahgren has officially broken the record for the most paying subscribers on the streaming platform following a marathon 31-day stream with more than 282,000 subscribers (at the time of writing) and climbing.

As reported by Kotaku, Ludwig —who already boasted 2 million followers— had undertaken a "never-ending" marathon stream challenge, where each subscription would add another 10 seconds to the time he streamed for. As you've probably gathered, things escalated as viewers kept subscribing and eventually he decided to set a cutoff date, with the stream coming to an end yesterday evening with a final day-long charity drive for The Human Society and St Jude's during which the record was broken.

The previous holder of the record was, as you've probably guessed, one Tyler 'Ninja' Blevins, who achieved the lofty figure of 269,154 subscriptions back in 2018. Ninja congratulated Ludwig on achieving the feat with a tweet, saying "Records are meant to be broken. I would be lying if I said I wasn't a little sad but congrats [Ludwig] on holding the new sub record on Twitch.

Ludwig meanwhile kept things short and sweet (which is probably expected while he recovers from the feat), simply telling his viewers "Thank you so much." in a post on his own Twitter account following the conclusion of the event at 5am UK time this morning.