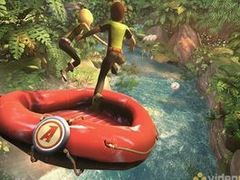 But, according to creative director Kudo Tsunoda, such criticism is a load of old tosh.

“Maybe this is naÃ¯ve on my part,” he said during a Microsoft Tea event following the platform holder’s conference.

He added: “I just don’t think the games gaming press or core gamers would enjoy all necessarily come down to whether you’re shooting something. If you think about a game like Mario Bros., would you say Mario Bros. is a core or casual game? That’s exactly what we’re doing with the Kinect products.”

Critics are already pointing towards the line-up of Kinect games unveiled by Microsoft, which includes first-party titles Kinect Adventures, Kinect Sports, Joy Ride and Kinectimals, as evidence that the tech is geared towards casual gamers.

Tsunoda, however, insists that Kinect is for everyone.

“You put stuff into a show format – all of those demos and all of the stuff you see at E3 – for any kind of game, you get to go get a ten minute experience or something like that.

“But if you look at River Rush, from Kinect Adventures, that in a lot of ways is like a platformer game. It’s all the same things you see in platformer games. The way you summed up how you would feel about Mario Bros. is exactly the way we look at the Kinect games. There’s the core gaming depth and skills, and the casual approachability that lets you get into it and play it right away. That’s what we focus on in all of the gameplay. When we say games are approachable, it doesn’t mean shallow. It just means you can get in and experience the game for what it is.

“What are the standard definition of things? If you say core, it really doesn’t mean it’s an action game where you’re shooting people. And that’s what it is. If I came to you today and I was like, hey, we’re going unveil this new game: it’s a plumber, and you’re going to be going through pipes, and you’re going to be jumping on turtles, you’d be asking the exact same questions that you’re asking about the Kinect experiences.”

Kinect’s out in the UK in November.