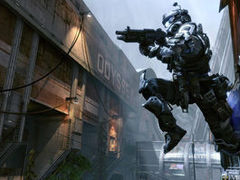 Respawn didn’t originally intend to release Titanfall on Xbox One – which could go some way to explaining the game’s underwhelming visuals on the next-gen console.

“Originally we weren’t planning on an Xbox One version of the game,” lead engineer Richard Baker told Digital Foundry in a new interview explaining the tech behind Titanfall. “I’m certain that having an Xbox One version has made our PC version much better – it justified the effort in moving to DX11 and even 64-bit.”

But if the game wasn’t originally scheduled for Microsoft’s next-gen console, what platforms did the developer have in mind, and when was the game originally planned to release? Baker doesn’t say, but a last-gen/PC release seems most likely.

And if it had been intended as a last-gen release, why was the Xbox 360 version outsourced to Bluepoint Games?

Nevertheless, Respawn intends to push the Xbox One version even further in the future, hinting at the possibility of the game’s native resolution being increased to 1080p via a future update.