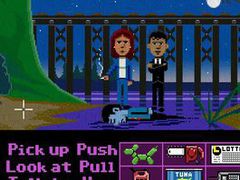 Thimbleweed Park, the new 2D point & click adventure from Ron Gilbert and Gary Winnick described as the spiritual successor to Maniac Mansion and Monkey Island, has reached its Kickstarter funding goal of $375,000 with 23 days to go.

“I don’t think I’ve ever rewritten an update or blog post as much as I have this one. I am at a loss for words. The support has been overwhelming and it’s making us giddy,” wrote Gilbert. “Before launching this Kickstarter, Gary and I debated endlessly if people would want a game that felt like it was made in 1987. A game made at the beginning of the golden era of point & click adventures. I think we have our answer. All 10,000+ of them.”

It looks likely the funding push will also reach its stretch goals.

By most popular demand, we’ll translate Thimbleweed Park into German, Spanish, French and Italian. We’ll also translate the game into one additional language the backers get to pick. If you pick Klingon, you better be fluent in it and willing to help.

Considered witchcraft in 1987, the English version of Thimbleweed Park will have full voice. Sit back, relax and let professionally trained actors save you the headache and embarrassment of actually having to read text. Reading is so 1987.

And there could be more to come if funding carries on, says Gilbert.