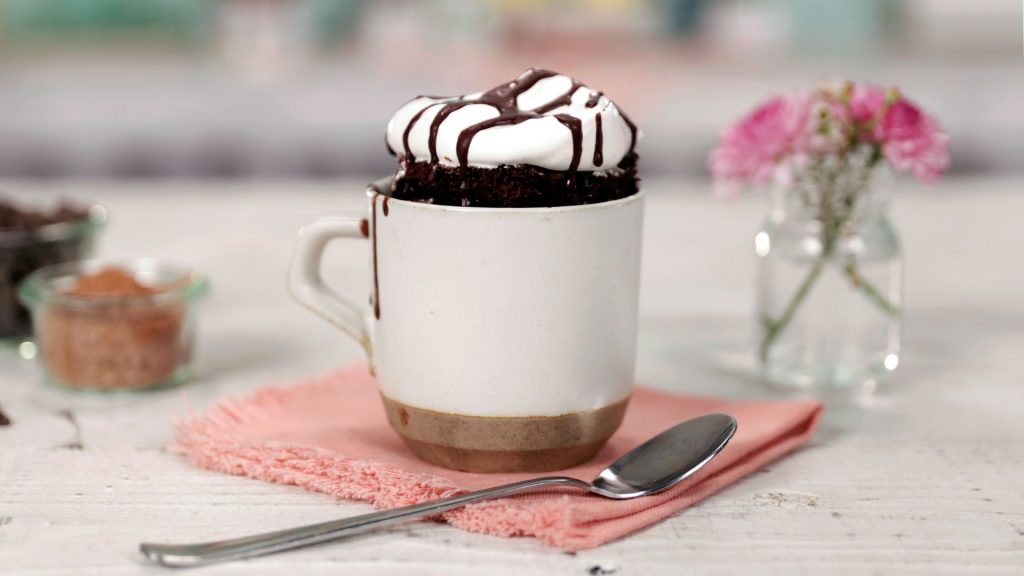 Today I bring you mug cake recipes. I feel like it is a time where mug cake recipes are necessary. Naturally, you’re able to swap ingredients as you see fit, but I am hoping to offer the classics and some more exciting ones in this selection. And, a word to the wise, these sometimes come out of the microwave, like, thermonuclear. Leave them to cool for a moment to avoid injury.

Get a mug and grease it with a bit of the butter. Then, take the remaining butter and the chocolate, put into a second mug, and microwave for around 15-20 seconds until melted. Add the egg and the milk and beat with a fork until smooth and combined. Add the sugar, flour, and salt, and do the same thing again. Place this mixture into the first greased mug and microwave for two minutes (800W).

Melt the butter in a mug in the microwave for 15-20 seconds, as per. Add the egg, milk, vanilla extract and mix until combined. Then, add the sugar, flour, and salt, and mix once more. Bake in the microwave for one minute, ish (800W). You could spoon vanilla icing and jam onto the top of this cake, to be fancy.

You know the drill. Pop the butter in the mug in the microwave, make it melty. Add the egg and sugar first, combine until smooth, then add the flour and salt, combine until smooth. Now, take half of the cake mixture and put it into another mug, and add the Kahlua and cocoa powder to the mix. Stir this through. For the other half of the cake mixture, add the vodka and vanilla extract and stir through. Combine the two halves into a whole again, but don’t mix them together. Take a skewer or a fork and swirl through the mix to make a marble effect. Cook in the microwave for two minutes (800W).

This recipe is ideal for that moment before the apples go a bit soft and papery, plus, it counts as one of your five a day. Grease a mug with a bit of the butter, and lay out the apple slices at the base of the mug. Melt the rest of the butter in another mug in the microwave and add the egg, milk, and vanilla extract and beat with a fork until combined. Add the flour, salt, sugar, and cinnamon and beat again until combined. Now, fold through the grated apple, before pouring this mixture into the greased mug. Bake in the microwave for two minutes (800W), then carefully turn the mug upside down onto a plate. Voila, a cute apple and cinnamon cake with apple slices on top.

I got these from Mima Sinclair’s Mug Cakes: 40 Speedy Cakes To Make In A Microwave. There are a few listings on Amazon and eBay too, and there’s a Barnes and Noble listing here for those of you across the pond. Here’s the news.

To slow the spread of coronavirus in Germany, the state government has banned all events in Cologne that will expect more than 1,000 attendees until April 10. “Since gamescom takes place at the end of August 2020, we are currently not affected by this decree,” explained the statement from Gamescom’s organisers. “However, we will of course follow the recommendations of the responsible authorities regarding major events, evaluate them on the daily basis and make our decisions after careful consideration.”

Here’s what the Xbox Series X is capable of:

Once again, Microsoft iterated that the legacy of the Xbox is extremely important to the Series X. “Players will see the benefits of the improved hardware of Xbox Series X for backwards compatible games, including improved boot and load times, more stable frame rates, higher resolutions and improved image quality,” it said, and added that it is continuing to “further enhance the existing catalog of games when running on Xbox Series X.”

Moreover, Microsoft said that it is “committed” to the console’s launch in holiday 2020, disregarding recent reports about the global economic impact of the pandemic.

The Raccoon City demo drops Jill into the thick of it, and players are able to get to grips with how the action-horror title has evolved since 1997. The asymmetric multiplayer mode Resident Evil: Resistance gets an open beta, too; and this begins on March 27. You’ll be able to try your hand at the devilish doohickeys at the disposal of the Mastermind, or put your heads together to outmaneuver the villain as one of the four survivors.

87-year-old Audrey—known as Mayor Audie to her fellow New Leaf villagers—had racked up almost 4,000 hours in the game over the course of four years. Her story went viral when her grandson recorded her taking a tour of her town, and Audrey couldn’t wait to get her hands on the new game when Nintendo announced New Horizons. It seems that the developer has paid tribute to Audrey’s dedication by naming a new villager after her. Audie is a rosy-coloured wolf with a sweep of blonde fringe and stylish yellow eyeshadow and eyeliner. Now, it isn’t known that Audie is Audrey, because Nintendo hasn’t officially come forward with a confirmation. Still, it would be a sweet homage to Audrey’s love for Animal Crossing.

In the March 17 Nintendo Indie World presentation, we were spoiled with a collection of indie games for Switch, new and old. We’ve got Ghost of a Tale and Wingspan coming to the platform in spring 2020, then Blair Witch, Sky: Children of the Light, and Superliminal following after in summer 2020. Dicey Dungeons will make the leap some time in 2020. New titles include Blue Fire, Baldo, B.Ark, I Am Dead, Cyanide & Happiness: Freakpocalypse, Summer in Mara, The Good Life, Eldest Souls, Quantum League, The Last Campfire, Moving Out, Faeria, and PixelJunk Eden 2.

A monumental evolution from the PlayStation 4 and Pro, but that’s sort of a given. The SSD is zoomy, and the PlayStation 5 will be using the Tempest engine to deliver immersive audio that will work with the structure of the human ear and head. Developers and composers are already chomping at the bit to get experimenting with the possibilities of the new PlayStation.

“While there has been incredible demand for our products during this time with many staying home to avoid the crowds (and to play games), the team at Razer understands that all of us have a part to play in fighting the virus—no matter which industry we come from,” announced Razer CEO Min-Liang Tan. “Over the past few days, our designers and engineers have been working 24-hour shifts to convert some of our existing manufacturing lines to produce surgical masks so that we can donate them to countries around the world. We intend to donate up to 1M masks to the health authorities of different countries globally.”

Half-Life: Alyx pre-orders exceed 300,000, tipping it to be the biggest Steam release of this year thus far

Both the Valve Index and the HTC Vive Cosmos Elite are offering a free copy of Half-Life: Alyx with their purchases, and that has helped the seriously impressive figure. Approximately 119,000 of the pre-orders come from Valve’s offer, and the number will increase seeing as HTC’s offer was only announced yesterday. PlayTracker’s data claims that Half-Life: Alyx may be the most successful Steam release of the year thus far, despite only launching on PC VR platforms.