Spielberg to direct Ready Player One for release in December 2017 - VideoGamer.com 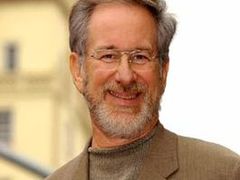 Spielberg to direct Ready Player One for release in December 2017

Steven Spielberg is to bring Ernest Cline’s near-future sci-fi novel Ready Player One to life on the big screen, with a December 15, 2017 release date already confirmed.

The novel’s back cover reads: “In the year 2044, reality is an ugly place. The only time teenage Wade Watts really feels alive is when he’s jacked into the virtual utopia known as the OASIS. Wade’s devoted his life to studying the puzzles hidden within this world’s digital confines-puzzles that are based on their creator’s obsession with the pop culture of decades past and that promise massive power and fortune to whoever can unlock them.

“But when Wade stumbles upon the first clue, he finds himself beset by players willing to kill to take this ultimate prize. The race is on, and if Wade’s going to survive, he’ll have to win-and confront the real world he’s always been so desperate to escape.”

The novel actually features some of Spielberg’s films, including Indiana Jones and The Goonies, but he says he may “leave most of them out” of his adaptation.

Set to begin filming in June, Olivia Cooke (Me and Earl and the Dying Girl) has been cast as the movie’s female lead.

Spielberg describes the story as a “crystal ball into exactly what is going to be happening not in 30 or 40 years but in between 5 and 10 years from now, where a virtual world becomes almost like a drug of choice and where we are spending more time in a nonorganic space than we are breathing and eating and interacting in real life”.

He says he’s already seeing the beginnings in his own family life, through his kids.

“They socialise for about a half hour, and it gets very quiet,” he said. “I walk into the kitchen and eight or nine girls are sitting around and they’re all looking at their phones, Snapchatting and texting and Twittering and reading. It’s all become so introverted.

“This movie is going to show why it’s interesting not living in the real world but what we’re missing by not.

“It’s a cautionary tale but it’s also a big rockin’ adventure movie, too.”