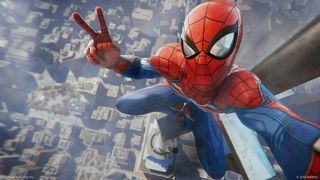 Updated on September 20, 2018 by Mike Harradence

Sony has crowned Spider-Man as the fastest-selling first-party PlayStation game of all time, having sold a whopping 3.3 million copies in just three days.

Developed by Resistance creator Insomniac Games, the web-slinging adventurere launched on PlayStation 4 on September 7, immediately making a huge dent on the UK All Format Chart. It even managed to fend off Shadow of the Tomb Raider in its second week.

The previous record holder was God of War, which sold an equally impressive 3.1 million copies in its first few days on sale back in March.

That's not all for Spidey, either. A record-setting one million pre-orders were placed for the game, and it also managed to top the opening weekend box office revenue pulled in by Spider-Man: Homecoming.

'Our expectations are always set at the highest levels,' said Sony's global senior vice president of sales, Stephen Turvey, who championed Insomniac and Marvel for 'bringing Spider-Man back to gaming in a way that you want to experience it.'

'It's met and exceeded all expectations. I think the company, and the campus, and our fans are super proud of it.'

Be sure to read Colm's thoughts on Spider-Man if you haven't grabbed the game yet.