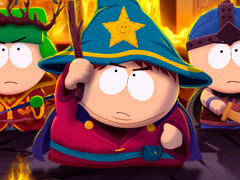 South Park: The Stick of Truth’s censored scenes have been completely removed from the disc in order to avoid a ‘Hot Coffee’ situation, according to comments allegedly made by one of the game’s associate producers on Reddit.

The comments, which were picked up by thirteen1 but have since been removed, explain that Ubisoft created five different versions of the game for specific territories across the world, including North/South America, Europe, Germany, Australia and Russia.

They continued: “To avoid a ‘Hot Coffee’ type situation, the 20-second-or-so gameplay/cutscene is removed completely from the disc and replaced with the screen you see at the link (times 6 more 20-second scenes).”

Hot Coffee is a reference to GTA: San Andreas’ infamous adult minigame, which had been cut from the game but remained on disc. The scene was later uncovered after the disc was data mined and became playable after enabling a mod.

The situation led to the game being recalled and re-rated as an Adult Only title in North America.

The scenes are each replaced by an image of the European flag, a facepalming statue and a description of the censored content. The PC version remains uncut.

The game launches this Friday, March 7 on Xbox 360, PlayStation 3 and PC.

South Park: The Stick of Truth

The South Park kids return in The Stick of Truth.

South Park: The Stick of Truth

The South Park kids return in The Stick of Truth.