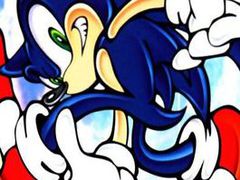 Sonic the Hedgehog was first released on the SEGA Mega Drive – or Genesis – on June 23 1991 – although he did appear (as an air-freshener, no less) in an arcade game called Rad Mobile even before this.

Since then, the blue rodent has starred in over thirty games – some better than others – in addition to numerous spin-offs (including those alongside his Nintendo counterpart, Mario) TV shows, and merchandise.

To date, the combined series has sold over 80 million units.

To celebrate, SEGA has several special things lined up. iPhone owners can hit up the App Store for a free Sonic 20th Anniversary app, which features Sonic 4 Episode 1, a drawing mini-game called ‘Sonic the Sketchhog’ in addition to information pages and weekly wallpaper downloads. This will only be available for six months.

Sonic Generations is being treated to a demo on Xbox LIVE and PSN, offering players a glimpse of Green Hill Zone in the old/new ‘classic style’. This is also for a limited period of time, and must be downloaded by July 12.

On top of this, this weekend welcomes the return of the Summer of Sonic fan convention, which promises to be extra special for 2011. A panel of Takashi Iizuka, Jun Senoue and Yuji Naka will be on hand to answer questions from fans, there’s live music from Julien K, speedrun competitions, a ‘Never Mind the Buzzbombers’ quiz (strictly for the most hardcore of Sonic fans) and a cosplayer competition (which is for even more hardcore fans).

From everybody at VideoGamer.com, happy birthday, Sonic!