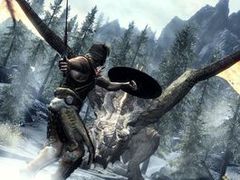 Skyrim made more money in 2011 than FIFA 12, Battlefield 3 – only beaten by Modern Warfare 3

The Elder Scrolls V: Skyrim generated more money than any other game in 2011, apart from Modern Warfare 3, according to publisher Bethesda. That means in terms of worldwide revenues it beat the likes of FIFA 12 and Battlefield 3.

While sales of the RPG were impressive in 2011, Bethesda states that “2012 sales remain strong, with continuing digital downloads and large shipments of units to retail”.

On console platforms, Skyrim outsold all exclusive titles, putting Xbox 360 sales in 2011 ahead of Gears of War 3, Halo Combat Evolved Anniversary and Forza 4, and PS3 sales ahead of Uncharted 3 and Resistance 3.

Skyrim recently won five IAA awards and the 1.4 update is now available on all platforms.