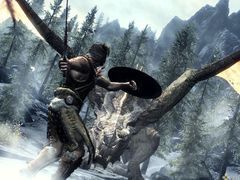 Bethesda has announced that the 1.4 update for The Elder Scrolls V: Skyrim is out now for Xbox 360, PlayStation 3 and PC. The update promises to fix a whole host of issues, but most important for many is the “Long term play optimizations for memory and performance” in the PlayStation 3 version of the game.

On Wednesday the high-resolution texture pack and Creation Kit was released for the PC version of Skyrim.

Response online to update 1.4 from PlayStation 3 Skyrim players has been positive so far, with many people claiming that the patch has dramatically improved the performance of the game on Sony’s console.