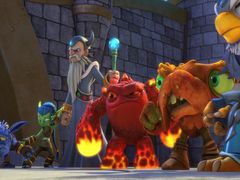 Skylanders animated series will premiere on Netflix this autumn

“Over the last five years, millions of families around the world have welcomed Skylanders characters into their homes. Now, they’ll be able to watch their favourite characters come to life on Netflix,” said Bobby Kotick, chief executive officer of Activision Blizzard. “We couldn’t have found a better home for Skylanders Academy and look forward to sharing our extraordinary characters with Netflix audiences around the world.”

The new show features the adventures of the Skylanders team who travel the Skylands universe, protecting it from evil-doers and showing the next wave of Academy cadets how to do things the “Skylander way.”

The show has a two season deal with Netflix.