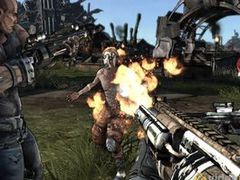 Updated on September 4, 2015 by David Scammell

The option to take screenshots and record gameplay footage in the Xbox One backwards compatible version of Borderlands has been disabled due to “licensing” issues, Microsoft has said.

“This is expected,” a member of the Xbox team posted on the Xbox.com forums. “Unfortunately, recording/screenshots are turned off for Borderlands. No need to file a report about this.”

The staff member later confirmed that the decision was linked to “licensing”, but did not go into any further detail.

Borderlands launched on Xbox 360, PS3 and PC back in 2009, with sequels Borderlands 2 and Borderlands: The Pre-Sequel following shortly after.

The game was made available to Xbox One Preview Members via backwards compatibility yesterday, and will be available at the public launch of the service this November.

A new PS4 and Xbox One Borderlands title, meanwhile, is currently in development at Gearbox.