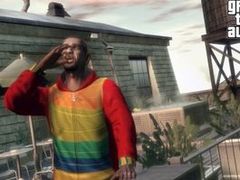 Microsoft has justifiably been chest thumping over its exclusive deal to bring GTA 4 DLC to Xbox 360 owners this autumn, most recently in a note to media reminding gamers that what can’t be had on PS3 are the much discussed downloadable episodes, which should offer gamers “hours of additional play”.

However, when we caught up with Reeves after his presentation to media at SCEE’s PlayStation Day in London last night and asked him whether it was damaging to Sony and the PS3 that there is no GTA 4 DLC coming, he replied: “Well I think you probably will see it, it’s just that a deal obviously was struck between Microsoft and Take 2 to do that, and if that’s what they want to do, I think that’s the last shot they have.”

We then asked Reeves if he had any message for PS3 fans who are wondering if there is going to be any PS3 GTA 4 DLC, and he replied: “I would say to them then, you know, email Rockstar (laughs), and ask them what’s coming. I think they already are, probably!”

Cryptic stuff indeed. Do you think GTA 4 DLC will eventually come to PS3 in some form? Let us know in the comments section below.

You can check out the rest of our interview with David Reeves here, as well as all of our extensive GTA 4 coverage over at the game page.