Resident Evil: Revelations 1 and 2 on Switch comes with 8-bit minigames 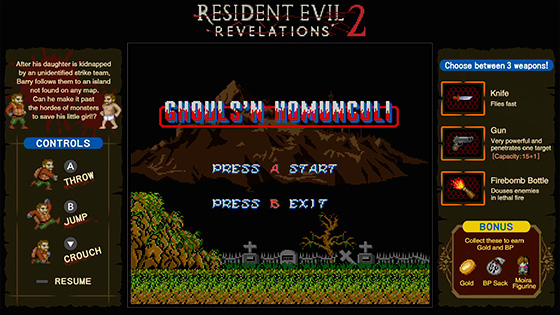 Resident Evil: Revelations 1 and 2 is coming to the Switch on November 28, and if you were unsure whether you should pick up the game on the Nintendo platform, then perhaps this’ll change your mind: Capcom has announced in two new trailers that the Switch ports will come with a couple of exclusive retro-style minigames.

The first, Ghost Ship Panic, comes with Resident Evil: Revelations, and is a score attack shoot-em-up. This mode is a loading screen minigame that tasks the player with shooting a variety of Ooze, Rachel Ooze, and Scagdead enemies using an on-screen cursor. As players kill hordes of enemies they can chain combos of kills to earn BP for use in the Raid mode. It’s quite reminiscent of those old school light-gun games.

The second is a throwback to the classic Ghouls ‘n Ghosts in form of the minigame Ghouls ‘n Homunculi. This time around the player controls Barry Burton (not Arthur) as he makes his way through the pixel-based platform game. Just like in the original Ghouls ‘n Ghosts, Barry Burton loses an item of clothing with each hit taken.