Remedy: We could make a ‘cool’ new Max Payne 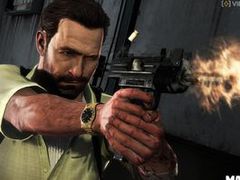 Remedy’s creative director Sam Lake believes that the team “could come up with something cool” for a new Max Payne game should Rockstar ever offer it the opportunity to return to the series.

Speaking to Metro, Lake revealed that while Remedy wasn’t actively involved in the development of Max Payne 3, Rockstar did approach the studio towards the end of the game’s development to act as consultants.

“We were playing the game and giving them feedback, and I had a nice opportunity of working with Dan Houser when he was creating the prequel comic book for Max Payne 3,” he said. “But other than that we were not involved. I don’t know… if that kind of opportunity [to return to the series] did present itself I think it would be fun.”

Remedy sold the Max Payne IP to Rockstar’s parent company Take-Two in 2002 following the launch of the first game, before working on a sequel immediately after. Max Payne 3 was developed internally at Rockstar.

“From a creator’s perspective it was actually nice knowing that we had sold the IP to Rockstar after the first one, and part of the deal was to make the second one,” Lake continued. “So through that whole project I knew that in all likelihood this was the last Max Payne that we would make. So doing that and saying your goodbyes to that franchise had a lot of closure for me. But who can say, if something like that would suddenly happen I’m sure that we could come up with something cool.”

Max Payne 3 released on Xbox 360, PS3 and PC in 2012, although Rockstar has yet to announce any future plans for the series. Remedy’s latest game, meanwhile, Quantum Break, launches on Xbox One and PC on April 5.