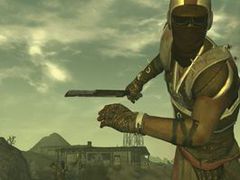 The game has generated well over $300 million in retail sales. Figures for digital sales weren’t given, but Bethesda described a “heavy volume” of digital downloads.

“We are delighted by the reception Fallout: New Vegas has received from fans around the world,” said Vlatko Andonov, president of Bethesda Softworks. “Despite the large launch quantities for this title, we have already received substantial re-orders from our retail partners, underscoring the tremendous popularity of this highly entertaining game. We believe Fallout: New Vegas will be the ‘must buy’ title for gamers throughout the holiday season.”

Fallout: New Vegas is available now for Xbox 360, PS3 and PC. The first DLC will be available later this year on Xbox LIVE.

The five million figure is an improvement over the 4.7 million units shipped at the launch of Fallout 3 towards the back end of 2008.