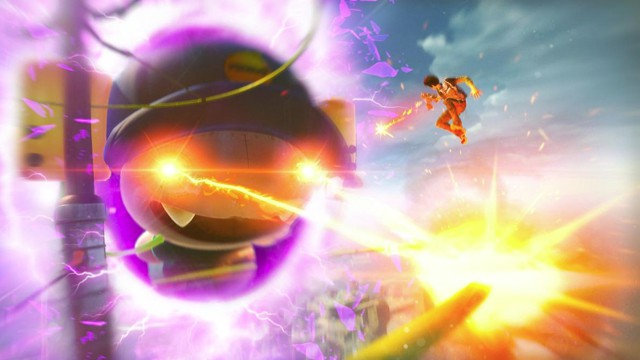 The official Ratchet & Clank: Rift Apart Twitter account has been having fun overnight, tweeting about a unique crossover with several PlayStation Studios titles that’ll feature in the game when it launches later this week.

A series of tweets featuring several PS exclusives eventually led to the unveiling of the Ryno 8, a new superweapon that can rip a hole in reality and will pull through objects from other PlayStation Studios games, including Naughty Dog’s Uncharted, Guerilla Games’ Horizon Zero Dawn, Sucker Punch’s Sly Raccoon and even Insomniac’s own rumoured-to-be-PlayStation bound former Xbox exclusive Sunset Overdrive.

It’s a very cool and unique way to do a crossover that fits perfectly within the game’s multi-dimensional premise and fun, over the top weapons that the series is known for. You can see a clip of the Ryno 8 gun in action below, and Ratchet & Clank: Rift Apart launches exclusively for the PlayStation 5 this Friday, June 11.

Ratchet: We made it outta the rift with a new super weapon: the RYNO 8!