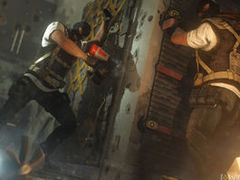 Rainbow Six Siege will not feature a single-player campaign mode, Ubisoft has confirmed.

Art director Scott Mitchell confirmed the news to WhatCulture during this weekend’s EGX, telling the site: “There is no story mode per se. You go through training, where you get to experience different operators and their devices. You can play against enemy AI in co-op through all the maps. You can customise matches, so that’s what we’re offering on the single-player side of things.”

Rainbow Six Siege joins the growing list of online shooters to abandon an offline campaign, alongside Star Wars Battlefront, Titanfall and Evolve. The Xbox 360 and PS3 versions of Call of Duty: Black Ops 3 won’t ship with a campaign mode, either, due to technical limitations.

Players will still be able to access some offline content in Rainbow Six Siege, however, including the game’s Terrorist Hunt mode, which sees players attempting to breach and clear buildings.

Rainbow Six Siege launches on PS4, Xbox One and PC on December 1. A multiplayer beta is currently underway on all three platforms.