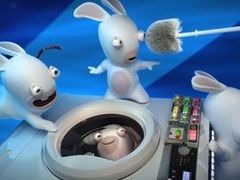 Rabbids back this winter with a new party game

Ubisoft has revealed the first details on Raving Rabbids: Travel in Time, the next instalment in the hit video game franchise.

After the surprisingly good Rabbids Go Home, in which the loveable rabbids invaded the moon, they return to their mini-game roots this winter with the release of Raving Rabbids: Travel in Time.

Described as a party game, Rabbids: Travel in Time sees the mischievous anthropomorphic rabbits jumping into a washing machine and travelling back in time to wreak havoc in the past, as they mess up historical events.

Gamers will be able to play over 20 different games based on five different gameplay types from flying to bouncing. For the first time in a Wii party-game, games will be playable either online or split-screen with up to four players. Several games will also offer improved accuracy through the use of Wii MotionPlus.

Raving Rabbids: Travel in Time is scheduled for release on Wii on November 12, 2010.