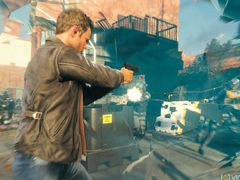 The studio will be responsible for developing the game’s story mode, with work already having been underway “for a while”.

“The whole team here at Remedy is incredibly excited to be an key partner in developing the future of the CROSSFIRE franchise,” commented the studio. “Smilegate specifically chose Remedy to bring our unique blend of storytelling, memorable characters and inventive gameplay to CROSSFIRE’s global audience.

“We have been developing this project for a while and couldn’t be more excited to show you what we’re working on, so stay tuned for more details later down the line.”

CrossFire 2 is the sequel to the original CrossFire, an online shooter that has achieved huge success in Asia. It isn’t clear, however, whether it’s the same game that’s also being worked on by Starbreeze, which announced plans to develop a new game in the franchise back in January.

A release date for the game has yet to be confirmed. Remedy announced that it was working on two new games last month.