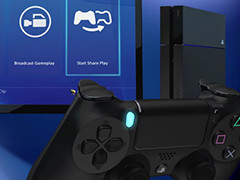 PS4 Share Play sessions will be capped at 720p and have a limited frame rate, Sony has confirmed to VideoGamer.com.

While the caps do not affect the host (1080p titles will continue to output at 1080p on the host’s TV), they may affect the gameplay experience of the guest, with the quality of the Share Play stream determined by both users’ internet connection.

The resolution on the guest’s TV will automatically scale up and down based on the quality of the connection, and while Sony has not stated exactly what the frame rate cap will be, an early demonstration shown to VideoGamer.com suggests it could be around 30fps.

“We are not going to [disclose a minimum speed] because if we say, for example, you need at least a 3MB speed, I cannot guarantee if it works [even if they have that speed],” SCEE product planning manager Kazuhiro Yanase explained to VideoGamer.com. “The internet environment is really different user by user. For example, some users will be using a LAN cable, some users will be using Wi-Fi, sometimes you use the microwave in your house. Something like that. It’s very difficult for us to guarantee you can use Share Play if you have [a certain] speed. That’s the reason why we are not going to disclose any specific number. But again, this doesn’t require any super-fast broadband.”

Share Play is set to be introduced to PS4 in tomorrow’s System Update 2.0 and allows players to invite a guest to watch their gameplay, join them as ‘player two’ in a multiplayer game, or hand control of the game to them – even if they don’t own the title currently being played. It’s an impressive piece of tech that – if it works – could completely change the way you buy and play games.

VideoGamer.com was given an early look at Share Play and the rest of System Update 2.0 last week, and was able to dig a little deeper into the lesser known features and restrictions/requirements of tomorrow’s update.

Want to know what we discovered? Take a look below: